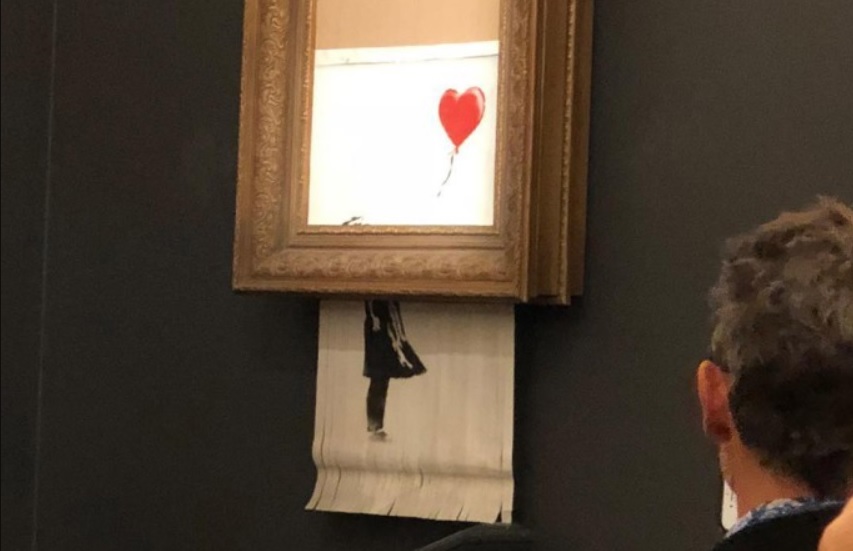 For the past several days, everyone has been talking about Banksy’s latest stunt, in which the famously secretive artist activated a secret shredder hidden inside the frame of one of his most iconic paintings just after it had been sold for $1.4 million at Sotheby’s Auction House in London, England. In a Friday news release, the auction house admitted that the stunt was “unexpected,” with Sotheby’s Alex Branczik saying: “It appears we just got Banksy-ed.”

That could have been the end of it, as everyone walked away thinking Banksy was a genius, a jackass, or something in between. Instead, countless brands and individuals saw the stunt as an opportunity, and somehow decided it’d be a good idea to mimic the shredded painting with “funny” memes of other stuff being shredded.

Needless to say, the results were exhausting. Let’s start with this Perrier ad featuring a can of Perrier Lemon (with a lemon balloon attached to the can) being shredded and popping out lemon slices:

Then there’s this from Richard Agius, a creative director at the TBWA/ANG ad agency, for McDonald’s. Slightly more clever, what with the fries replacing the shredded paper, but still utterly pointless:

Ikea, Mazu Resortwear, and even an Irish grocery store got in on the fun as well. And as you might imagine, the rest of the internet has jumped on the trend too, digitally recreating the stunt to make political statements that don’t quite have the same impact in meme-form as they might otherwise:

So I heard this happened today, right in front of a shocked audience. (Artist unknown) pic.twitter.com/YnfpplY8cq

I’m not anti-meme, but I am anti-this-specific-meme. It just doesn’t work! And the fact that brands were on top of this before anyone else was should tell you basically everything you need to know. That said, the animation in the one about climate change is pretty neat. Still, let’s stop this and find something else to meme.