Does anyone want to take a guess what phrase Google autocompletes when you go to the search bar and start typing in “Carole Baskin …”? If you’re one of the millions of people who binged Netflix’s Tiger King: Murder, Mayhem, and Madness — which has been and remains the top Netflix TV series in the US right, based on the streamer’s own rankings you can see inside the app — you already know the answer.

Tiger King doesn’t actually answer the question of whether or not Carole killed her husband by feeding him to the animals in her sanctuary, though it strongly hints at such and leaves that impression with viewers. That question has gone on to become the stuff of Internet gold, with one Twitter user even showing how he’s having a bit of self-indulgent fun while quarantining at home because of the coronavirus — asking delivery drivers to place his packages under the “Yes” or “No” in response to the question taped to his door asking for their opinion about whether Carole, in fact, did it. Meantime, you might be asking, how’s Carole feeling about all this? What’s her response?

If you’d like to traipse down that uncomfortable rabbit hole, she’s got you covered, thanks to a series of videos she’s filmed in response to the Netflix documentary — videos with which she hopes to convince you she’s not the monster the documentary makes her out to be (though the footage she filmed has the production aesthetic of a hostage video).

Baskin, the founder and CEO of Big Cat Rescue, also has a page set up with a long, detailed, written explanation in which she tries to deconstruct the Tiger King narrative. That’s where you can find the series of videos she filmed, in case you don’t want to read the whole thing.

A brief intro from Carole:

Carole, on why she never took a polygraph after her husband’s disappearance:

Carole, on the supposed “real story” behind why “Tiger King portrayed me as someone who went after Joe’s poor mother and father” —

There are several more videos available to watch at that page, but I now want to zero in on the main thing you all care about — Carole’s description of why the “meat grinder” theory of her husband’s death is “the most ludicrous of all the lies.”

“As Gladys and the daughters did everything they could to make life difficult for me after Don disappeared, they spread this rumor that they thought I had ground Don up and fed him to the cats,” Carole writes. “And the media loved it. The meat grinder shown in the video was enormous. Our meat grinder was one of those little tabletop, hand crank things, like you’d have in your kitchen at home, like the one pictured here.”

And then she helpfully includes a picture of one, amid a description of her husband’s disappearance: 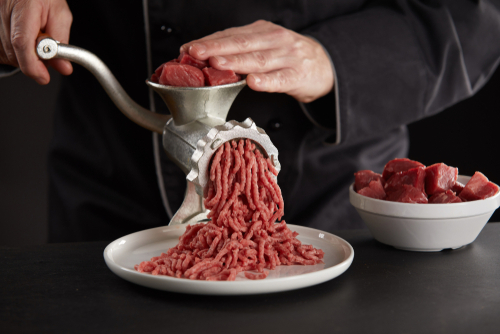 The whole thing is worth a read if you want to hear a long, unfiltered version of the story straight from Carole herself. Or you could just wait for the miniseries being developed in which SNL’s Kate McKinnon will star as Carole.