See if you agree with this list of the most popular Christmas movies, state-by-state

I’m not sure I understand the average American anymore.

No, this is not a post about politics or about how people feel about the latest Trump headline. My beef is that too few of you are willing to claim Will Ferrell’s 2003 classic Elf as your favorite Christmas movie. How do I know? The folks at home advice website House Method have told us so, thanks to a survey the site conducted in mid-November of 4,580 Americans who were asked to choose their favorite Christmas movie from Rotten Tomatoes’ List of Top 50 Christmas Movies. Elf, by the way, doesn’t show up until spot #29 on that list, which really puts the “rotten” in Rotten Tomatoes.

So what movies did people from across the fruited plain peg as their favorite Yuletide cinema treat? Read on for the full run-down, but we will go ahead and tell you that 1983’s A Christmas Story was the overall winner, chosen as the favorite in a whopping 24 states.

Close on its heels, in second place, was (thank you!) Elf, listed as a favorite of 11 states. At least there are some people out there who don’t need to be reminded that the best way to spread Christmas cheer is to sing the praises of Elf loud, for all to hear. Home Alone, meanwhile, also pulled out a win in four states.

You’ll notice a few other oddities as you scan the rest of the favorites from around the country, such as, inexplicably, The Nightmare Before Christmas. It will also be interesting to see how this list changes next year and beyond, with streamers like Netflix going deep into funding original Christmas movie productions and buying others. Along those lines, check out our interview with Sergio Pablos, the co-creator of Despicable Me who’s also directed Klaus, a kind of Santa Claus origin story which is Netflix’s first animated feature (and which enjoys a 99% audience score on Rotten Tomatoes as of the time of this writing). 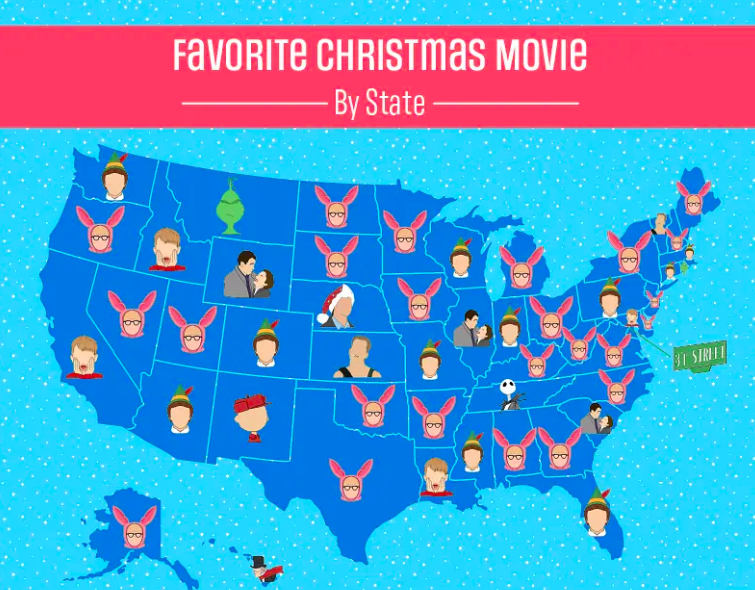 And here’s the key for the movie each of those symbols corresponds to: 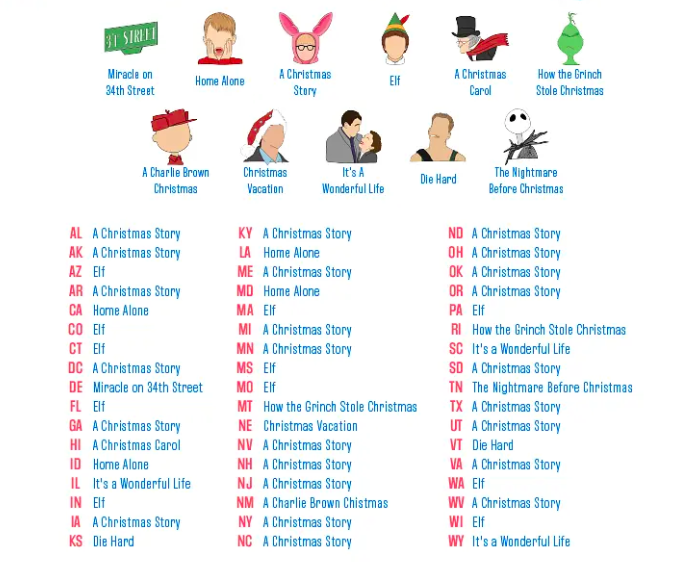