The Best Electric Lighters That You’ll Never Have to Replace – BGR
Click to Skip Ad
Closing in...

You don’t have to be an everyday smoker to recognize just how inconvenient it is to reach into your pocket for a lighter, only to realize it’s completely dead. Sure, you can easily go to the corner store and pick up a new one, but that’s not always a given — especially considering most instances that require a lighter are pretty “in the moment” type situations. Whether it’s to light a cigarette, campfire, or just a fragrant candle, there’s no telling when you’ll need a lighter on the fly. But if you’re sick of using cheap, easy-to-lose convenience store lighters or sick of filling up that antiquated butane lighter seemingly every week, you can always opt for an electric lighter. While we understand you might have some reservations when it comes to making the switch from a classic lighter, a flameless lighter certainly has its benefits. For starters, you merely have to recharge it, as opposed to re-filing or, worse yet, repurchasing. They’re also much safer, so if you have children who may or may not be entering the “pyromaniac” stage of their youth, these lighters might serve as the better alternative. Plus, they might be a little harder to misplace, considering they’re slightly larger and a bit more expensive than a traditional lighter. Here, we’ll look at some of the best electric lighters on the web right now, and you can make the ultimate decision on whether or not you want to make the switch. Chances are, you will.

Best Flameless Lighter for Your Pocket

For those only willing to make the switch if the lighter, at least from a sheer “looks” standpoint, resembles the traditional model, or you just prefer something that can easily slip right into your pocket, this Arc Lighter USB Rechargeable Electric Lighter from lcfun is a solid choice. With four battery indicators of 25, 50, 75, and 100 percent, in addition to an LED power display, you’ll never be surprised when your lighter is running out of juice again. This electrically powered device has a plasma arc design, making it incredibly difficult to burn yourself in the same manner you would with an open flame. Additionally, it’s far easier to “light,” as it’s made with a high-tech fingerprint induction switch that requires a simple touch, as opposed to the at-times difficult to light switches you find on regular butane lighters. In addition to being easier on the fingers, the lighter is windproof, rainproof, and essentially weatherproof overall. It’s also, super long-lasting, as it comes with a built-in, rechargeable lithium ion cell battery. It takes just an hour to fully charge and can last up to weeks or even months, depending on your usage. 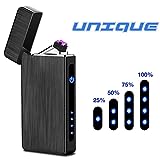 When lighting something like a candle, you’re going to want something a bit longer to better protect yourself from the flame. The Saberlight Extended Arc Lighter, which boasts a much longer neck like a traditional grill lighter, is certainly a great option. Much like the first option, this lighter is also of the plasma arc sort, only with an extended neck that allows you to light candles, grills, or campfires, or anything that requires reach for extra precaution. The lighter is 9″ in length, giving you ample room to light any flame. It’s also made with a rechargeable lithium ion cell battery that can last up to three hours after only one hour of charging. It’s also rather durable, as it’s both windproof and rainproof, allowing you to use it outside in virtually any conditions. The lighter is even TSA-approved, so you’ll have no trouble taking it on a plane. 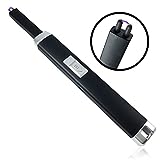 From a versatility standpoint, this plasma RONXS Lighter might just be in a league of its own. Unlike the Saberlight, this lighter’s elongated neck is fully flexible and features full 360-degree rotation, allowing you to contort it into virtually any direction possible and light hard to reach areas. This lighter is also very quiet and one of the safest on the market, as it features a safety switch that’s designed to keep your fingers as far away from the flame as possible. It also displays real-time battery volume and features five LED light indicators to let you know when your lighter needs to be charged or how much juice it has left, in general. When fully charged, it can provide up to a whopping 500 lightings. In addition to being lightweight, it’s also wind and splash-proof, allowing you to use it both indoors and out. The whole set comes with the RONXS Rechargeable Lighter, a USB Charging Cable, and even a gift box in case you want to give it to that special someone. Although it’s certainly cost-effective enough to give it to that, well, not-so-special someone too. 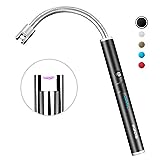