Most of the intrigue ahead of Google’s hardware event Tuesday in terms of what new products and designs the tech giant will reveal has essentially disappeared, now that we know most of the key details about what will be unveiled — including the Pixel 4 and Pixel 4 XL, a new Pixelbook, and a new Nest Wi-Fi, among others devices.

Nevertheless, in these final hours ahead of the October 15 “Made By Google” event, which gets underway at 10 a.m. Eastern in New York, the rumors and leaks are still trickling out. Like this one: The design of the Nest Mini that Google is expected to unveil tomorrow was leaked on Monday.

An announcement confirming the Nest Mini is believed to be coming Tuesday as a successor to Google’s Home Mini from two years ago. Thanks to the leak as reported by WinFuture, however, it seems that Google has decided to ensure this speaker looks remarkably similar to the previous generation of the product. In fact, other than the new Nest branding, the only things that are visibly new when it comes to the Nest Mini’s look and feel seem to be a new power connector and the hole that allows it to be mounted on a wall.

Here’s one of the images showing the new design WinFuture published Monday: 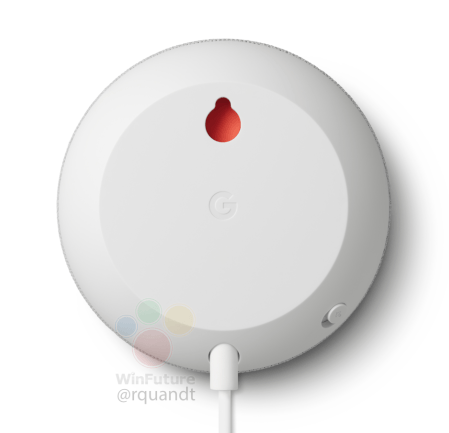 In terms of other key details to know, it seems that the color options will include light blue, coral, black, as well as gray. Per WinFuture, Bluetooth has also been upgraded to 5.0. Presumably, any other significant updates and tweaks will be in the form of things you can’t see, such as audio and perhaps other aspects of the user experience, so we’ll have to wait and see what Google acknowledges Tuesday along those lines.

Meanwhile, check out our earlier reporting to get a rundown of some of the other announcements expected Tuesday, including the new Pixelbook and the Pixel 4.