Everything Microsoft revealed at its 2019 Surface event 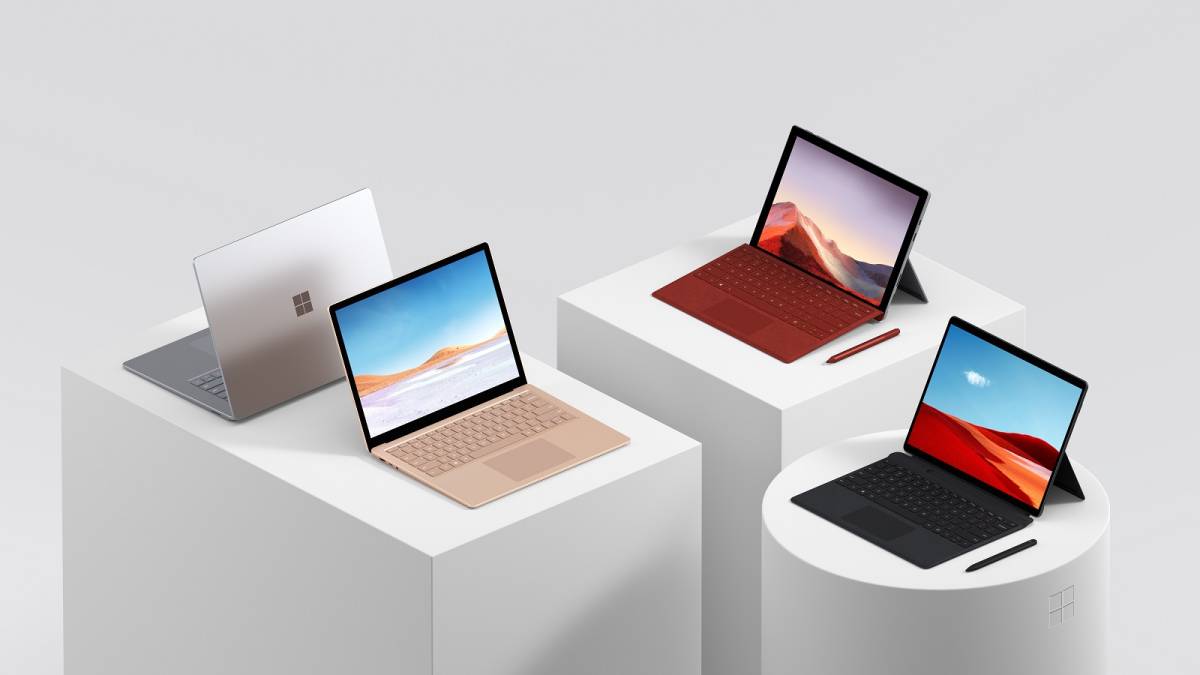 Microsoft held its annual Surface event in New York on Wednesday, and in addition to confirming all of the leaks and rumors that had been floating around in recent weeks, the company also surprised us with one major announcement at the end of the show. But before we get there, let’s go through everything Microsoft revealed.

The first product on display was the new Surface Laptop 3, which comes in both 13.5-inch and 15-inch models for the first time ever. The laptop also features a machined aluminum finish, USB-C connector (finally!), quad-core 10th Intel Core processor, Intel Iris plus graphics, 20% larger trackpad with the same 1.3mm key travel, and PixelSense Display with Touch. There will also be a an AMD-only 15-inch model with AMD’s Ryzen Microsoft Surface Edition processors and integrated Radeon Vega graphics. Microsoft says the Laptop 3 is two times faster than the Laptop 2, and three times faster than the MacBook Air. Oh, and it can play Fortnite, too.

Microsoft also showed off how easily the keyboard can be removed to allow access to the laptop’s internals, which should make repairs easier than ever before. And the Surface Laptop 3 also supports fast charging, and can charge up to 80% in just an hour. Preorders begin today, with the 13.5-inch model starting at $999, and the 15-inch models starting at $1,199. The Surface Laptop 3 launches on October 22nd. 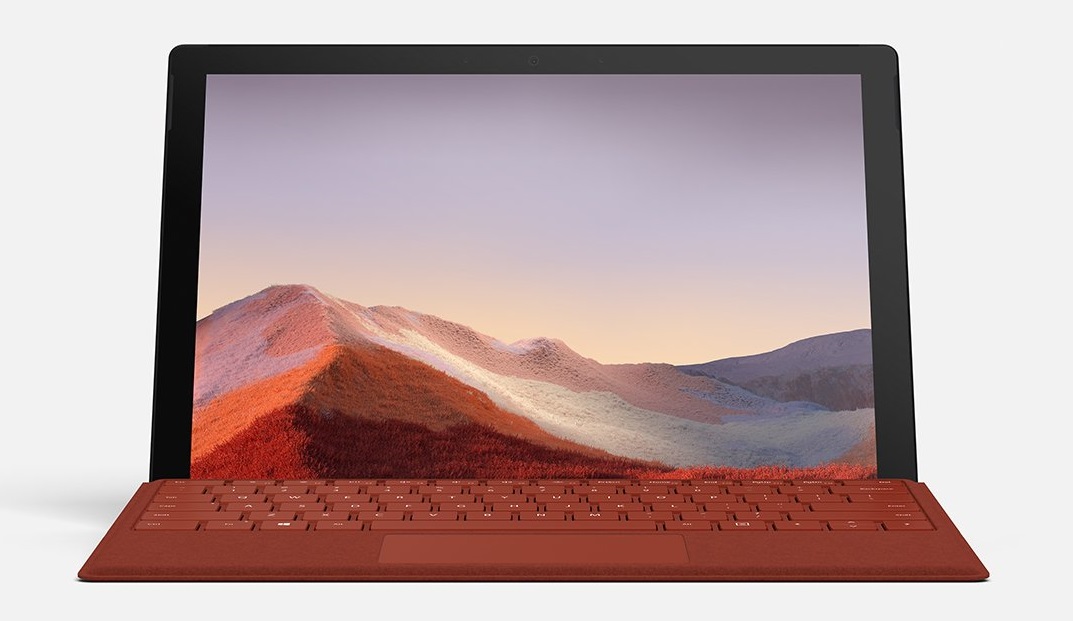 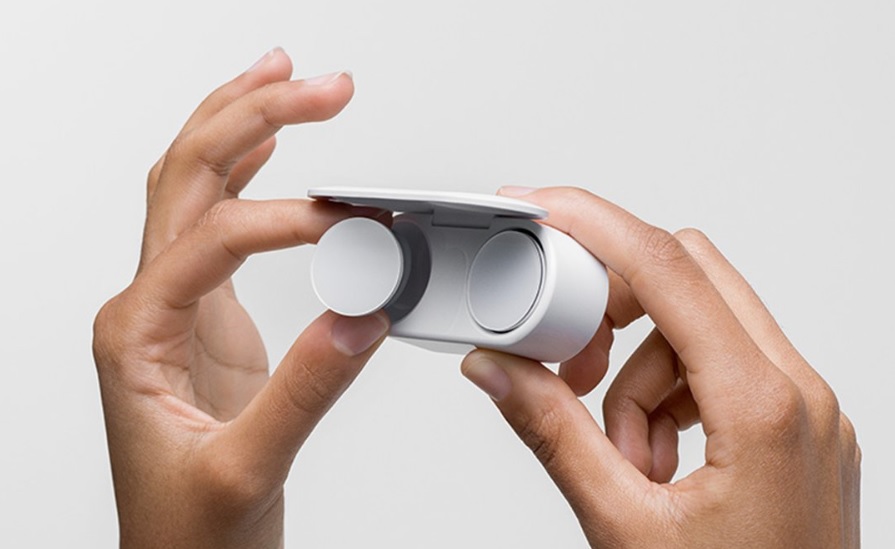 The first surprise of the day was the unveiling of the Surface Earbuds. These wireless headphones feature directional dual mic arrays in each earbud, omnisonic sound, one-click pairing to your device, a charging case, up to 24 hours of battery life, and support for gestures. They will be available this holiday season for $249.

Microsoft says the ARM-based Surface Pro X will push the product category forward. Although it features the same 12-inch chassis as the standard Surface Pro, the device has a 13-inch display with the “thinnest bezels on any 2-in-1.” The 13-inch PixelSense Display has a 1400:1 contrast ratio, 2880 x 1990 resolution, and 267 PPI. The Surface Pro X also ships with a new Surface Slim Pen that slots into the hinge of the device where it can charge.

Inside the 2-in-1 is a custom Surface SQ1 chipset, a GPU that pushes over 2 teraflops, and support for LTE. It also has a USB-C port, fast charging, removable SSD, and weighs just 1.68 pounds. Preorders for Microsoft’s first ARM-based device in years is up for preorder now and will be available on November 5th for $999. 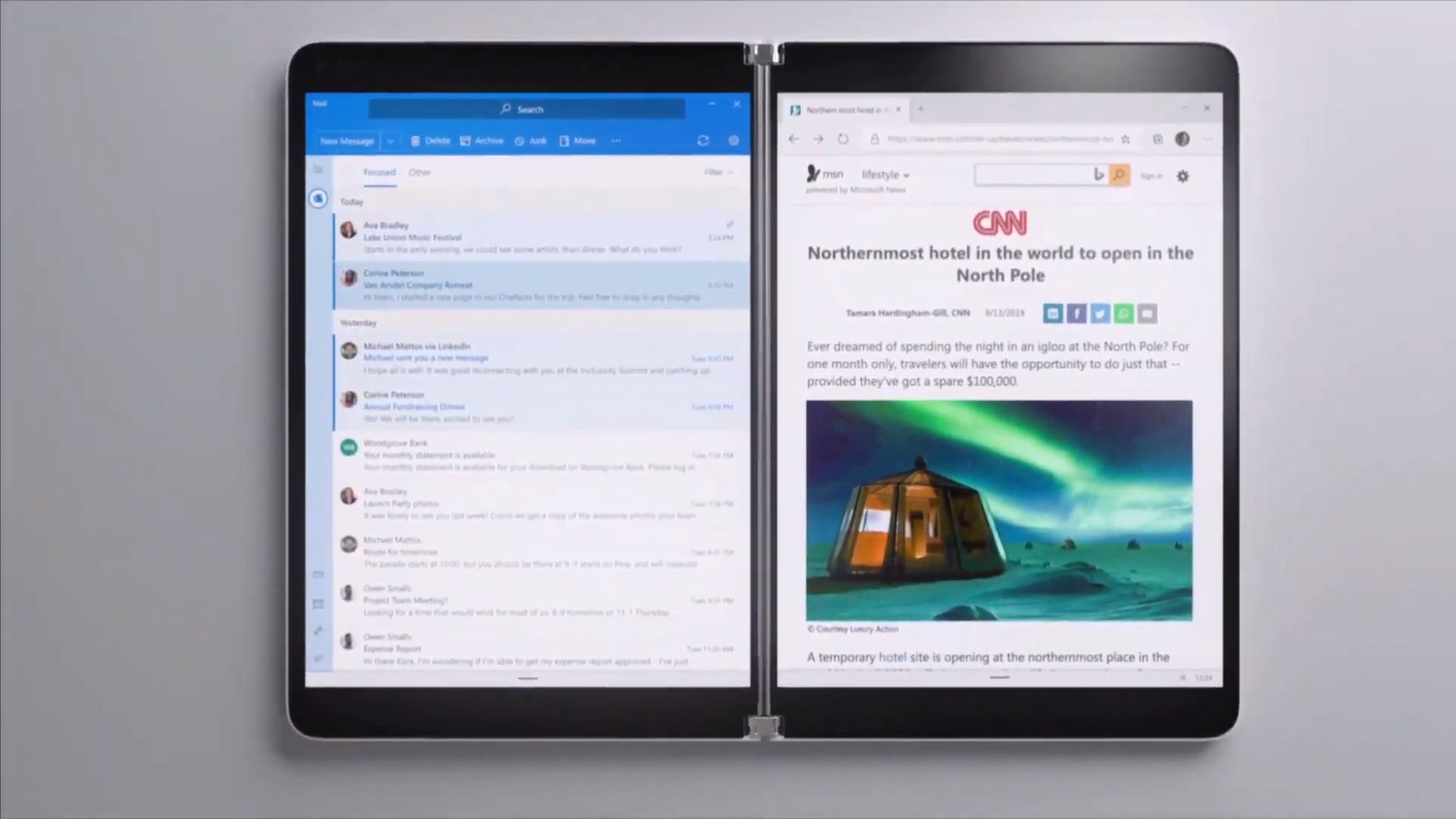 To cap off the event, Microsoft Surface head Panos Panay gave us an early look at the Surface Neo, which is the dual-screen, foldable device that has been making headlines for months. Each side of Neo is 5.6mm thin, it features “the thinnest LCD that’s ever been created,” and it weighs 655g. The keyboard magnetically connects to the back of the Neo, as does the Surface Pen, where it can charge.

When you flip the keyboard up to cover half of the bottom display, the remaining screen becomes something called a WonderBar, which looks a lot like the Touch Bar on the MacBook Pro. This is just one of the ways the Windows 10X software supports the new form factor. Intel’s Lakefield Processor will be featured inside the Surface Neo.

Microsoft will launch the Surface Neo in the 2020 holiday season.

The biggest surprise of all was the reveal of the Surface Duo, which is another dual-screen device with a smaller form factor that runs Android apps. Panay wouldn’t go as far as to call it a phone, but that’s really what it is. It features two 5.6-inch displays, makes phone calls, sends texts, and seemingly modifies the Android operating system to make it look more like Windows 10X. And like the Surface Neo, the Surface Duo launches next holiday.