In order to get some protein daily, a lot of people love to cook hard-boiled eggs and bring them to work. But not everybody has time to sit and watch a boiling pot of water, only to dunk the eggs for a certain amount of time. While you’re getting dressed in the morning, you’d be able to cook delicious eggs in a variety of different styles if you had an egg cooker. An egg cooker takes your mind off constantly watching to see if your eggs are done and it’ll produce them just the way you want them. Whether you just want one or you want to cook 12 at once, we have products for you to check out. Let’s take a look at some of the best available egg cookers.

With plenty of options on how to use it, you’ll never run out of ways to enjoy the KRUPS F23070 Egg Cooker. It can cook up to seven eggs at a time in either a hard-boiled, soft-boiled, poached, or omelet fashion. There are two poaching trays included as well as a removable egg holder, so you’ll be able to wash off your eggs after you cook them. There’s a measuring cup with firmness markings to help you get the exact cook you want. There’s also an egg piercer as well as a dual switch that’ll let you toggle between cooking the eggs and keeping them warm. It is backed by a two-year warranty, so you’ll be able to try it out for a while.

For the times that you’re cooking for your whole family, you should get the Dash DEC012AQ Deluxe Rapid Egg Cooker. You can make a dozen eggs at once in this machine, thanks to the two stacked trays. The auto-timer lets you select a cooking method and then it’ll shut itself off automatically to prevent overcooking. With the cooker comes a poaching tray, omelet bowl, egg holder trays, measuring cup, recipe book and recipe database access. You can also steam vegetables in this egg cooker. 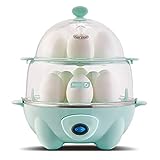 Best Egg Cooker to Use in a Rush

You can set the Maxi-Matic EGC-007 Easy Electric Egg Poacher to cook however you’d like it to and it’ll alert you when it’s done. The buzzer alarm will sound and the machine will automatically shut off. Using this to cook your eggs is faster than boiling water and it can hold up to seven eggs. The clear cover lets you view the eggs while they cook. The piercing pin makes sure that shells won’t crack and you won’t need to use oil or fat to enjoy hard-boiled, soft-boiled or poached eggs. 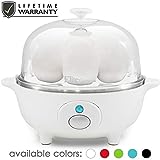 At just $29 for 4K and HDR, there’s nothing else like this Roku Premiere deal