A new report from Opensignal reveals that Samsung handsets, more often than not, boast the fastest download speeds compared to other smartphones on the market today. While you might think that similarly situated handsets on the same network might be equal in terms of speed, network speed can be impacted by any number of factors, including the chipset chosen by the manufacturer, carrier aggregation, and more.

Indeed, one of the reasons Apple recently spent $1 billion Intel’s modem business, while also striking a settlement deal with Qualcomm, is that they realized that sourcing chips from a rival company like Mediatek would have resulted in a subpar network experience.

In any event, let’s dive into the report.

Opensignal took a look at smartphone performance across 73 countries, a fact worth noting given that some handsets might experience better network performance relative to others in different countries. So while Samsung devices were, on the whole, faster than the iPhone, the report found that the iPhone saw faster download speeds in 17.5% of countries.

The list of countries where iPhone download speeds came out on top includes Brazil, Costa Rica, Kuwait, Morocco, Saudi Arabia, Taiwan, and the UAE. Samsung, meanwhile, emerged victorious in the US, Spain, Russia, Mexico, Australia, Italy, and a handful of others.

Perhaps most striking is the experience of Apple users. In the U.S., a very strong iPhone market, Apple users experienced download speeds 8.2 Mbps slower than Samsung users. Given that Samsung makes a wide range of models from cheap to premium, while Apple only offers premium-priced models, this is an even more impressive result.

The chart below provides a helpful illustration of download speeds on a country by country basis: 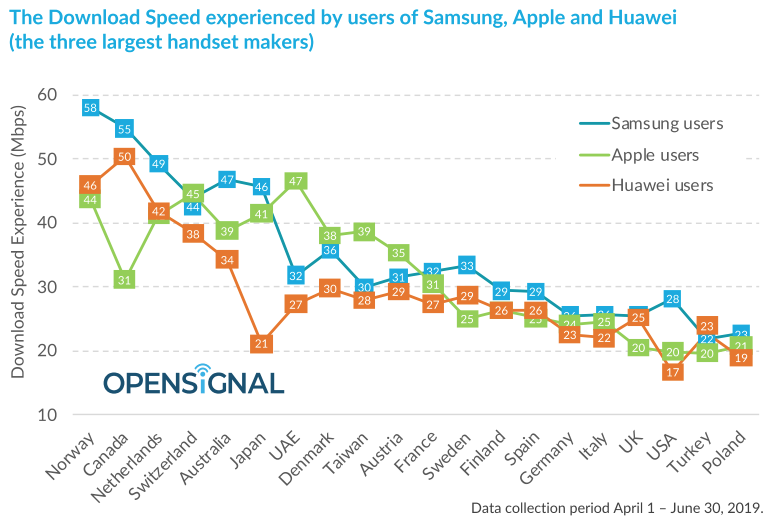 All told, the results here aren’t all that surprising given that we’ve seen similar studies over the past few years regarding the iPhone’s poor cellular performance compared to similarly situated Samsung devices.

The full report, which includes a lot more detail, can be viewed over here.