HTC Vive Pro review: Where am I?

The HTC Vive is one of the most remarkable success stories in recent tech history. While Oculus spent years building hype towards the eventual release of its consumer VR headset, HTC and Valve swooped in and stole the show with the Vive, which had full room-scale VR tracking and controller support far in advance of the Oculus Rift. Developer support and a majority of market share followed, and while the Oculus has made up some ground by dropping the price of the Rift as low as it can possibly go, HTC is making it clear that it’s more interested in advancing VR technology than engaging in a race to the bottom. To that end, we have the HTC Vive Pro. It’s the most powerful VR headset on the market, and you can tell both by its spec sheet and its price tag.

The most obvious thing you’ll notice about the Vive Pro at first glance is that it’s a different color. Gone is the black plastic of the original Vive and in its place is a kind of dark bluish-purple. I don’t really have an opinion either way on this because it’s such a minor change, and you’ll obviously not notice when you’re wearing the headset anyway. In any case, that’s a thing.

The guts of the Pro are a big step up from its predecessor. The original Vive has an OLED display with a resolution of 2160×1200. The Vive Pro tops that with an AMOLED display at a resolution of 2880×1600, which is 1440×1600 per eye. The field of view and refresh rate remain the same at 110 degrees and 90 Hz, respectively. On paper those numbers are pretty impressive, but it’s not until you actually compare the experience of the two headsets that you really see the difference.

I played a handful of new and old VR titles with the original HTC Vive and the Vive Pro back-to-back to get a feel for how big of a change it actually is, and I can say without a doubt that once you’ve used the Vive Pro it’s not easy to go back to the original Vive, or the Rift, for that matter. 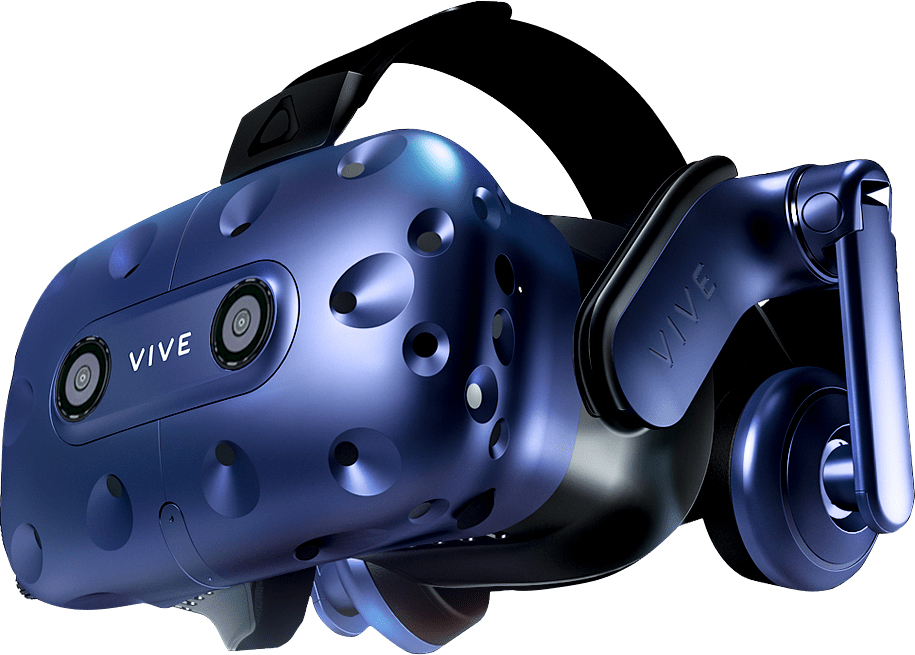 In mega-nerd VR circles (I can say that because I’m one of those people), the most sought-after aspect of the VR experience is “presence,” which is your ability to suspend your disbelief and feel like you’re really in the game. No matter what headset you choose, a number of different things are constantly fighting to pull you back to reality. Accidentally hitting a real-life wall with your hand, tripping over your cat, or having to adjust the headset mid-game are some common examples of the things that can ruin your feeling of presence. The “screendoor” effect of many VR headsets — the fact that you can make out individual pixels on the display, because it’s so close to your face — is also a huge presence killer.

The display of the original Vive is quite good, but as with every other VR headset, you’d never forget that you’re actually looking at a digital screen. The Vive Pro, on the other hand, is the first VR headset I’ve ever worn that actually let me feel like maybe I was really there. The screendoor effect has been cut down dramatically, making small text easier to read and allowing you to spot tiny details that would likely be entirely lost on a lower resolution headset. It’s still not entirely perfect, of course, and sometimes if I moved my eyes side-to-side I could still see the slightly blurry edges of the lenses as they twisted the pixels around my field of view, but it’s so much better than anything before it that I’m comfortable saying it deserves its “Pro” branding.

On the audio side, the Vive Pro includes integrated headphones, which are fully adjustable and quite comfortable once you get them positioned exactly right. These are on-ear headphones, so if you’re used to big over-ear cups (like I am) it can feel a little weird, but the audio quality is actually pretty impressive for their size. A built-in digital amplifier gives the audio plenty of weight, and the best compliment I can give the headphones is that I forgot they were there for most of my playtime.

The uptick in resolution and integrated audio would have probably made this the must-have VR headset, but there’s a number of other changes that are hugely welcome. The entire headset is now much more rigid, and the display pivots up and down so you can easily lift it up to either remove it or just see what’s going on out in the real world. The base version of the Pro is still corded (a wireless adapter for the entire system is on the way, though I did not get the opportunity to try that out), but the thick collection of cords running from the headset to the computer on the original Vive has been swapped out for a single proprietary cable that carries everything, cutting down on weight and making the entire experience less cumbersome.

A pair of built-in cameras and dual microphones round out the features list. I didn’t play any games that put those to much use, but they’re there, and I’m sure developers will come up with some very interesting ways of using them.

Let’s Do Some Math

The Vive Pro is a package for the most dedicated VR early adopters and fans, and the price of admission makes that very clear. At $799, it’s launching at the same price the original Vive launched at in 2016. However, because HTC is likely seeing this as a big upgrade for current Vive owners, the headset is being sold on its own, and won’t come with controllers or base stations (for tracking). Rather than forcing new customers to buy both headsets, HTC is launching a “SteamVR 1.0 tracking bundle” for Vive Pro buyers which includes all the extra stuff you’ll need, which is a pair of base stations and two Vive controllers, for $299, which is around $200 less than what you’d pay normally.

From an outsider’s point of view, dropping over $1,000 on everything you need for the Vive Pro experience — on top of a powerful PC to actually play the games — probably seems a bit silly, but anyone who’s been bitten by the VR bug knows how much fun virtual worlds can be. If you already own a Vive or Rift and enjoy it, trying the Vive Pro is absolutely going to make you want the upgrade. If you have the money to spend, it’s worth it.

For first timers, the original Vive package is now $499, and it comes with everything you need. Start there, and if you end up deciding you want to make the jump to the Pro, you’ll already have the base stations and controllers, making the upgrade a painless process.