‘The Walking Dead: A New Frontier’ review: Ties That Bind Part I & II

As morbid as 2016 has been up to this point, I wasn’t sure that the third season of Telltale’s The Walking Dead would have the same effect on me as the first did four years ago. After all, the second season didn’t grab me the way the first did, but after playing through the first two chapters of A New Frontier (the third season), I’m once again as invested in this world as I was in 2012.

[SPOILER ALERT: No major twists will be revealed in this review, but several plot points and characters are discussed. If you want to go in completely cold, you might want to skip this review for now.]

The Walking Dead: A New Frontier once again introduces a new player character. Although Clementine has been the thread that has tied the series together, the protagonist has changed every season. In season three, we meet a new character by the name of Javier García as he struggles to keep his family alive.

Before the action kicks off, Ties That Bind (the two-part season premiere) takes us back to the beginning of the apocalypse, where Javier is late arriving at his brother’s house as his father passes away. We see the antagonistic relationship between the brothers, we meet Javier’s niece, nephew, sister-in-law and mother and we watch as Javier’s dead father inevitably gets up out of bed, shambles over to the window and tries to eat his mourning family as they swirl through a torrent of fear and confusion.

The episode then flashes forward to the present, where Javier is on the road with his sister-in-law Kate, his niece Mariana and his nephew Gabriel. Being Mari and Gabe’s stepmother, Kate isn’t on the best of terms with the kids, but though their relationship is strained, they do their best to get along in light of their situation.

One of the first meaningful interactive conversations in the game takes place between Javier and Kate as the kids nap in the back of the van they’ve been riding through the post-apocalyptic wasteland. Within minutes, I had a feel for what these four had been through in the years since the outbreak, which speaks to just how ruthlessly efficient the writers on this series can be. While I wasn’t as enthralled with season two as I was the first season, the team has come back stronger than ever in season three.

In order to stock up on supplies, Javier and his family decide to stop at junkyard, where they search for gas and other miscellaneous supplies. Everything appears to be going smoothly, with only minimal interference from walkers, but they run into trouble when the group that runs the junkyard returns to find Javier scavenging through their supplies. Following an altercation, our protagonist is knocked unconscious. 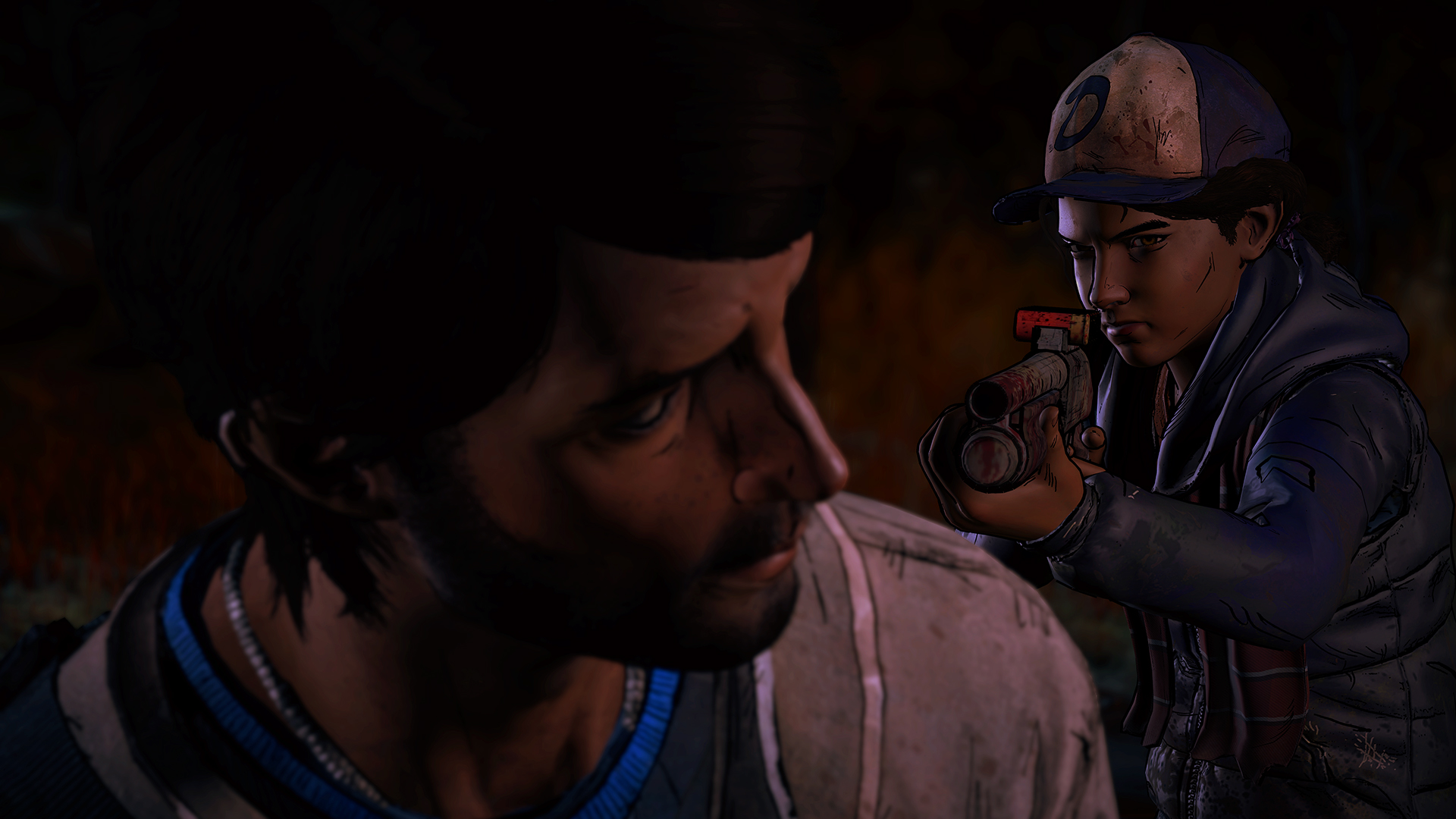 Javier wakes up in the passenger seat of a truck, being driven away from the junkyard. He has a curt conversation with the driver which is cut short by a tree crashing down on the road in front of them, causing the truck to veer into the woods and crash. It turns out that Clementine was behind the falling tree, and in exchange for Javier’s van, she’s willing to help him get back to his family.

Clementine convinces Javier to travel with her to a nearly settlement called Prescott before they return to the junkyard. As badly as Javier wants to find his family, he admits that it wouldn’t make much sense to do so in the middle of the night without a plan or backup. So we head to Prescott to meet the rest of the cast.

That’s the setup, but the payoff begins shortly after, as Clementine makes trouble in Prescott, Javier recruits allies to help him recover his family and The New Frontier make a shocking, horrifying entrance. 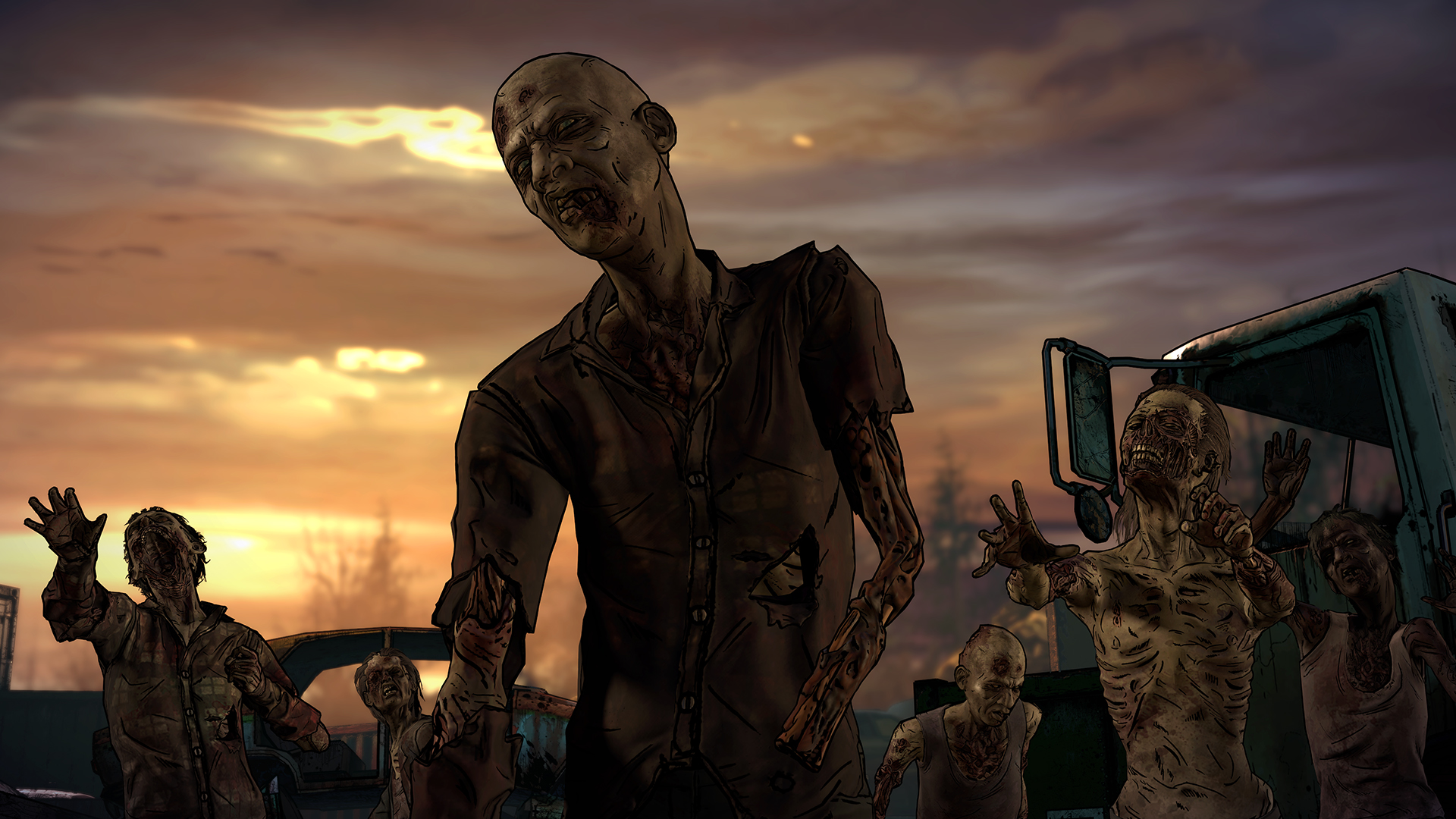 As excited as I was to play as Clementine in The Walking Dead’s second season (and as anxious as I am to see where how her story evolves in season three), I think that Telltale was smart to pass the torch to another survivor to kick off A New Frontier. Javier is as dynamic and well-written as any of our favorite characters from the first season, giving us a fresh pair of eyes through which to see the bleak world of the game.

The Wolf Among Us managed to usurp The Walking Dead as my favorite adventure game of 2014, but based on the first two episodes, I have high hopes for the remainder of A New Frontier.

Tweet
Pokemon Go developers are reportedly making their own wearables