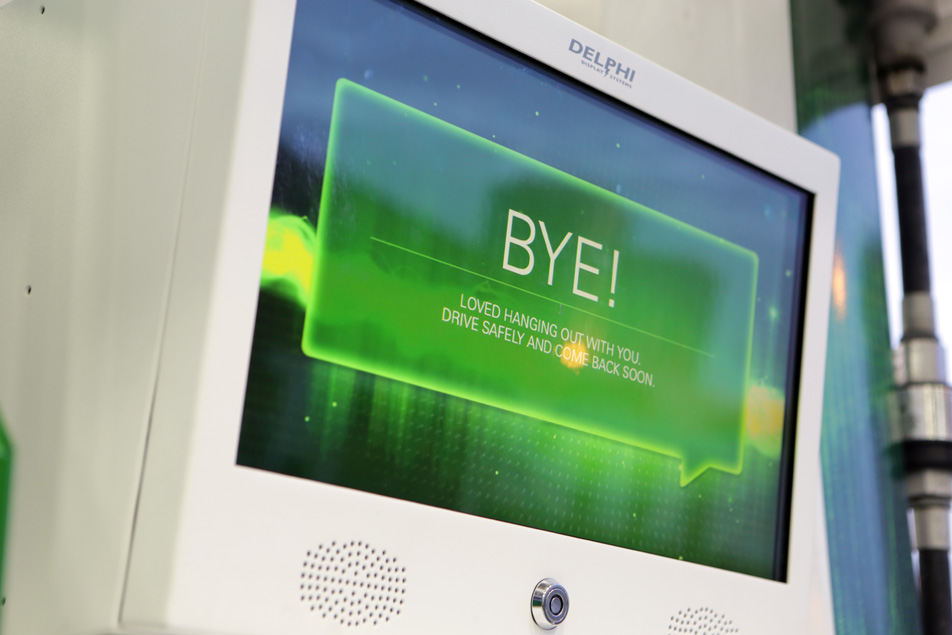 Through February, the oil and gas giant BP is testing a new kind of pump technology at several gas stations in the Chicago and New York City metro areas. The technology includes a tablet that lets customers interact with an assistive, AI-based personality called “Miles.”

BP says it’s installed proprietary voice-activation technology inside what it’s calling its new “personality pumps,” which let customers do everything from play music through Pandora to answering music trivia to whipping up a quick, fun video e-card they can send to a friend. “Miles” is a friendly sounding helper and keeps things light since, of course, most people will only be there for the 5 minutes or less it takes to put gas in the tank.

Sure, it might sound completely unnecessary — distracting, even — for someone just there for a quick fill-up. No one goes to the gas station because they want to be there. It’s an interruption; a transactional way-station that’s not all that fun to be at.

Which is why BP’s innovation is interesting on a deeper than just a legacy company trying to shake up the customer experience:

“Miles” represents another incremental spread of a particular kind of AI creation. Our future will be filled with all kinds of different versions of “Miles” robots, AI assistants and more that have names, personalities, quirks and other things meant to make them relatable — and, ultimately, likable- – to the mere mortals that will use them and exist among them.

“I won’t beat around the bush,” said Doug Dryan, BP’s consumer advertising manager. “The industry I’m in, retail gasoline, isn’t the most personable experience. The majority of the transactions that happen at a BP site — there is no personal experience. The consumer is buying and dispensing their fuel at the pump. You never actually to talk anyone. It’s one of the hard parts about our industry. The entire industry has gone to an ease of buying or ease of payment, because consumers do want to get in and out quick.”

Tech giants like Microsoft and Apple have already decided AI like this will carry increasing sway over our gadgets. In tandem with that, they and their competitors are acclimating us to the ubiquity of assistive personalities and virtual assistants ready with quips and quick replies, just like Miles.

If we like Cortana, the thinking goes — if she’s funny, likable, helpful — we’ll use her more. Which helps Microsoft make her smarter, and gives the company more data from our searches and queries to parse and study to make its own systems smarter. And on and on that cycle goes.

Hey Cortana, how’d you develop such a winsome personality, I might ask if I was typing this on something other than a MacBook Air. Easy, she’d reply – my creators hired writers from around the world, some of whom don’t even have tech backgrounds and who are playwrights and artists and similar creatives, to write all these wonderful things for me to say.

These assistants, meanwhile, are already pervasive, or nearly so. Amazon keeps giving Alexa more so-called “skills” — actions like the ability to text or play music. The Information reported in recent days that more than 5,000 such skills are now available, a figure that’s grown from about 130 since January. Samsung, meanwhile, plans to incorporate an AI-based digital assistant in its Galaxy S8.

We’ll be greeted by such assistants everywhere, it seems, as the BP news shows. For its part, BP began testing Miles at select locations in NYC and Chicago on Nov. 15.

“This is not about getting customers to spend 15 minutes on site with Miles,” Dryan said, acknowledging that the average visit to the pump may only span something on the order of three to five minutes. “It’s about — we know you’ve got to fill up your car or put fuel in your car, so let’s make that experience a little more enjoyable and interactive and quite honestly maybe put a smile on your face while you’re doing it. It’s more about us starting to innovate in the (fuel) dispenser area for consumers, and maybe this is great and it does roll out to more places. But there will also be other things that roll out next year we want to try as well. This is kind of our first step.”

Tweet
Report says the new 4.7-inch iPhone 8 will be more exciting than you think