You can now preorder an awesome N64 Bluetooth controller for iOS, Android and PC

Are you sick of playing mobile games with touch controls? Would you rather plug an old Nintendo 64 controller into your phone than tap and swipe at the screen?

Well, I have good news and bad news.

Back in June, when E3 2016 was in full swing, 8Bitdo (best known for their NES30 Bluetooth controller) revealed that it was working on an N64 controller to add to its sizable lineup of classic controller recreations. On Thursday, without any official word from the company itself, the controller went up on Amazon.

According to the listing, the controller is compatible with both iOS and Android devices, as well as Mac and PC. If you prefer to use a cord, the device also appears to come with a 6-foot USB cable that you can plug into the controller. The controller will cost $49.99 and begins shipping on October 25th.

If you’re a fan of emulation gaming and want the experience to feel as authentic as possible, the N64 Bluetooth controller should be a no-brainer. On the other hand, if you just miss the N64 days, this might still fit the bill.

You can preorder the controller from Amazon by following this link. 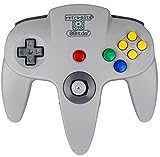