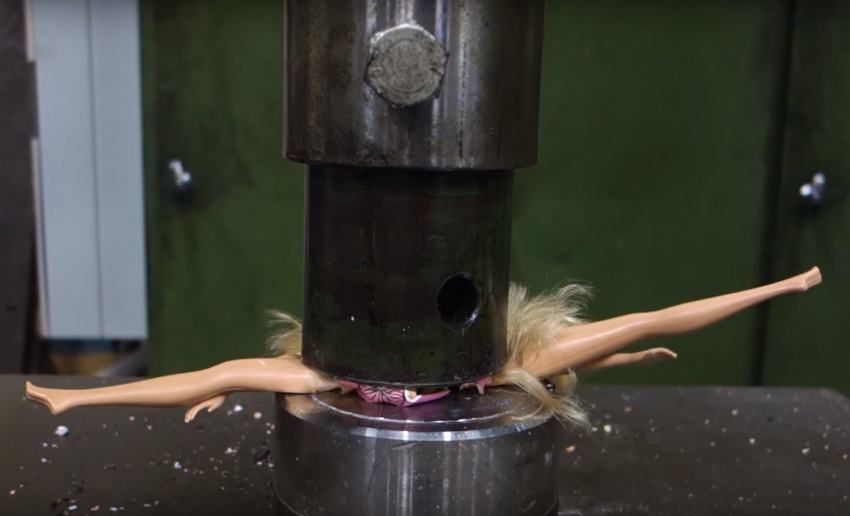 A Barbie doll sits innocently atop a workbench, unaware of the 100 tons of terror that are about to close in on it. Off camera, we hear a man with a Finnish accent say ominously that the doll is “beautiful… but [for] how long?” A motor starts whirring up and within seconds a hydraulic press closes in on the iconic toy and then… SQUISH.

This is the kind of wanton destruction that occurs on a regular basis at the Hydraulic Press Channel, a YouTube channel that popped up last year and has since become a smash hit on social media sites like Reddit. As of this writing, the channel has more than 450,000 subscribers and its videos have been watched collectively more than 36 million times.

This week, BGR talked with the channel’s founder Lauri Vuohensilta about his newfound Internet fame and his ambitions to take crushing things with hydraulic presses to a whole new level.

Vuohensilta, who hails from Finland, says he uses the hydraulic press for his actual job probably two to three times per month, although most of the time it sits by idly. After watching other popular YouTube channels dedicated solely to destroying things, he realized that his hydraulic press would be the perfect tool for viral video destruction.

His first video involved crushing a golf ball with the press and from there he moved on to Barbie dolls, mobile phones, hockey pucks and more. Incidentally, he says that the hockey puck is his favorite thing he’s crushed so far because it so unexpectedly exploded under the pressure:

He had a bet with his wife, who can often be heard cracking up in the background during his videos, about whether the press would be strong enough to do major damage to the little disc of vulcanized rubber. He won that bet, however, and the hockey puck lost badly:

The couple’s reactions are part of what make the videos so funny. While she’s normally laughing like crazy as yet another household appliance gets smooshed, he’ll usually state the obvious in a fairly deadpan manner. After the hockey puck exploded, for example, all he could say was, “Hockey puck exploded!”

Nonetheless, there are some things that Vuohensilta isn’t yet brave enough to crush. Many of his viewers have asked him to crush things that contain lithium-ion batteries, which he has so far refused to do because of very sensible worries that they would explode and burn down his workshop.

That said, Vuohensilta doesn’t rule out crushing such things in the future after he completes his plan to build a much larger press capable of exerting a maximum 1,000 tons of pressure, which is 10 times as powerful as the press he’s using right now. He says that he’ll be able to put this new press outdoors, which would minimize the risks that he would set a building on fire when crushing a lithium-ion battery.

“With 1,000 tons, I could press the iPhone to one-tenth of its original bigness,” he tells us.

For now, though, he’ll have to make do with his 100-ton hydraulic press and we can’t wait to see what he crushes with it next.