Samsung Gear S2 hands on: Has the Apple Watch met its match? 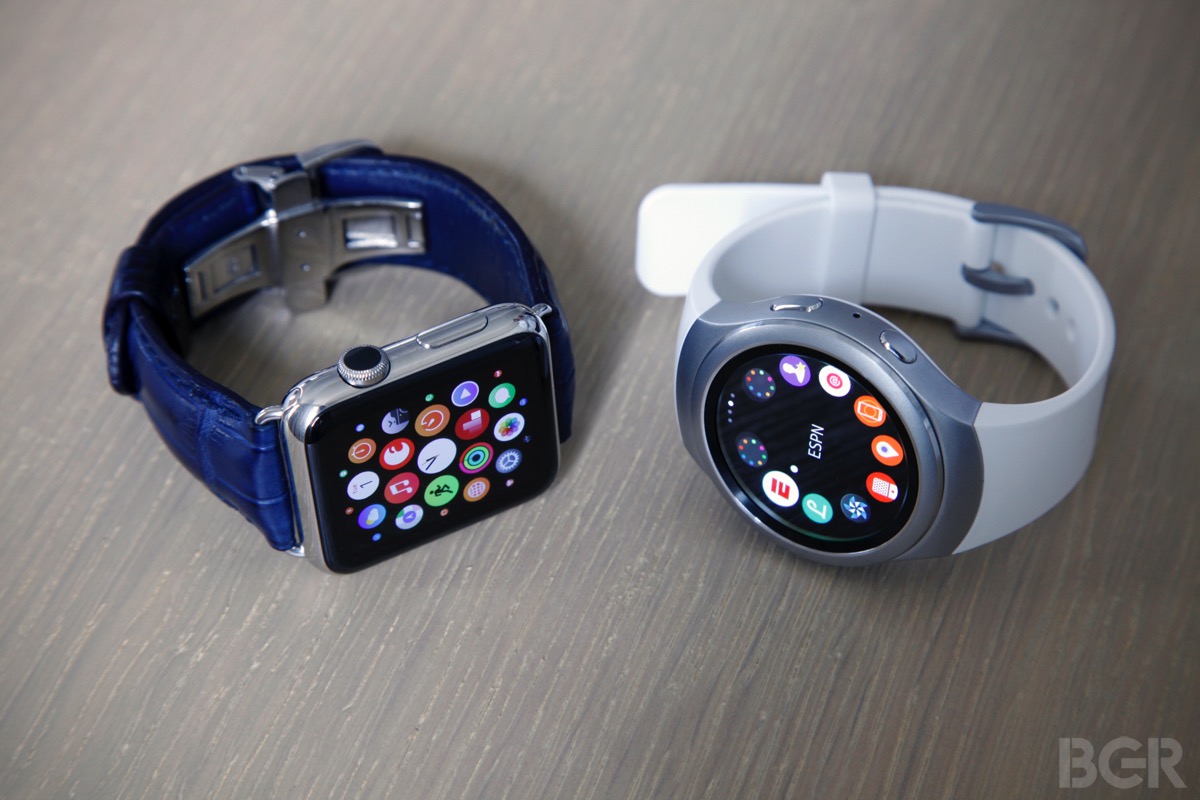 Ahead of the debut of Samsung’s new Gear S2 smartwatch, Apple blogs were abuzz with accusations that Samsung was about to rip off Apple once again. Leaked images showed circular icons that certainly seemed to be eerily reminiscent of the Apple Watch’s icons. Given Samsung’s rich history of copying Apple, bloggers took the leap and assumed we were in store for yet another Samsung product inspired by an Apple device that came before it.

Now that I’ve met with Samsung and tested the Gear S2 a bit, it’s time to see how it stacks up against the smartwatch market leader, and to determine once and for all whether Samsung’s new watch really is an Apple ripoff.

First, a bit about the Gear S2:

Samsung’s latest smartwatch is the most recent in a long line of wrist-worn devices from the South Korean company. Its first smartwatch was abysmal, rushed out in response to rumors that Apple was developing an “iWatch.” The design was ugly and the software was terrible. It was a low point for Samsung.

The company’s subsequent smartwatches were improvements over the original Galaxy Gear, but it would have been difficult to make them worse. Samsung did continue to release products that felt a bit confused, however, which is understandable considering the company started by launching solutions instead of first identifying a problem.

Samsung has released smartwatches running four different operating systems in just the past few years. With the Gear S2, the company appears to have landed on its own Tizen OS once and for all, and this is a smart move on Samsung’s part. Android Wear will be a fine smartwatch operating system someday, but today is not that day.

Tizen on the Gear S2 is sleek and reasonably smooth, though not as responsive as Apple’s WatchOS. Its user interface looks terrific on the Gear S2’s round AMOLED display, which measures 1.2 inches diagonally and sports 320 x 320 resolution. On such a small panel, that works out to a pixel density of 302 ppi.

And no, Tizen is not a ripoff of WatchOS.

There are certainly a few areas where Samsung’s watch interface takes cues from Apple, with the most notable being the round app icons visible in the photo at the top of this article. It’s an obvious but forgivable move, considering how frequently mobile software makers borrow from each other.

From there, Samsung’s Gear S2 deviates fairly sharply from the Apple Watch. Samsung seems to want its watch to consume more of the user’s attention. While the Apple Watch is designed for quick interactions, users are encouraged to go a bit deeper with the Gear S2. For example, the device has a T9 style keyboard so users can actually type messages on the screen. I’m not a fan, though some may appreciate the option.

Navigating the Gear S2 requires either touches and taps, or twists of the device’s rotating bezel. The bezel is a nice touch and it has a good feel to it, marking another key area where the Apple Watch and Gear S2 diverge. Navigation on the Apple Watch is largely in and out or up and down, while Samsung’s UI relies more on side to side movements.

I can’t say I prefer one method to the other.

The look and feel of the Gear S2 are impressive. I wouldn’t say it feels like a premium device to the extent that the Apple Watch does, but it certainly outshines most Android Wear watches I’ve tried by a fair margin. That includes the new Moto 360, which I previewed just yesterday. The S2 is very light, and the metal case has a nice feel to it.

Samsung is releasing three versions of the Gear S2. The high-end model is the Gear S2 Classic, which only comes in a 40mm size and features a premium ceramic bezel. A 42mm Gear S2 comes in either black or white, and a 44mm version offers the same two color options but adds an integrated 3G radio. A phone will still be required for some functionality on the 3G model, and it will need to be added to your carrier’s data plan, which typically costs $10 per month in the U.S.

The 44mm 3G Gear S2 will launch sometime after the first two models, though no specific release dates or pricing are available for the time being.

Compared to its earlier smartwatch efforts, Samsung has done a great job on the Gear S2. And to give the device its best possible chance to succeed, it will work with all Android smartphones that run Android 4.4 or later, and have 1.5GB or more of onboard RAM, rather than just Samsung smartphones. Remember when the original Galaxy Gear launched and only worked with one single Samsung smartphone model? Apparently, Samsung has learned from that mistake.

The Gear S2 also includes Samsung Pay, but only NFC payments are supported as the device does not feature the technology Samsung gained through its acquisition of LoopPay.

I’m looking forward to spending more time with the Gear S2, which I see as the Apple Watch’s biggest rival. Of course, neither will steal much business from its chief competition since the Apple Watch can only be used with iPhones and the Gear S2 only supports Android phones.

Samsung did a good job on the S2, and though I’ve only spent a short amount of time with it so far, I already view it as a better option for Android users than any current Android Wear watches.

Updated to clarify that compatible Android phones must have at least 1.5GB of RAM, not 2GB.