My dream of America’s nightmare Super Bowl has been dashed 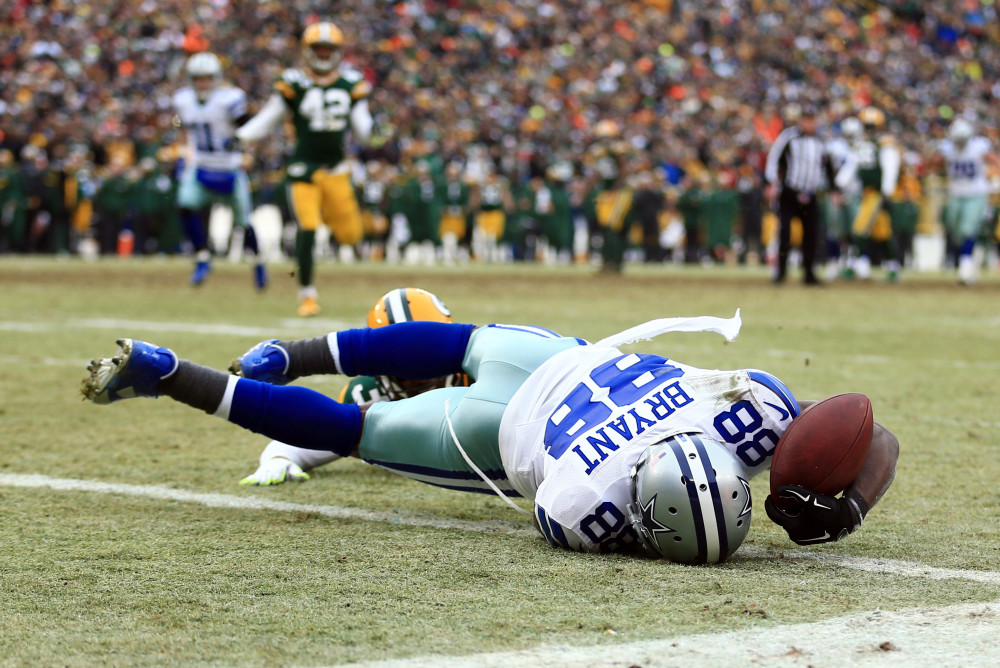 It was so close to becoming a reality. It appeared that Dez Bryant had made a miraculous catch near Green Bay’s end zone that would have put Dallas in position to take the lead and thus keep hope alive that this could be the year that America’s two most hated football teams could meet up in the Super Bowl.

I’m referring, of course, to the aforementioned Dallas Cowboys and my own hometown New England Patriots, two franchises that generate hilarious howls of rage from football fans across the country.

Why these franchises are so despised isn’t hard to fathom. In the case of the Patriots, they’re led by a head coach who infuriates the rest of the league by coming up with sneaky ways to either bend or break the rules of the game. The infamous “Spygate” scandal, in which the Patriots were caught illegally videotaping opponents’ defensive signals, was enough to make America despise the team, and that’s before you consider all the constant little games Bill Belichick plays with injury reports and reporting ineligible receivers.

Oh, and not to mention the Patriots’ starting quarterback is a smug pretty boy who loves to whine at the officials when things don’t go his way and who offends decent God-fearing Americans everywhere by dropping multiple f-bombs on national TV during games.

And again: I’m a Patriots fan. And I more than understand why this team is hated. And I think it’s awesome.

The Cowboys, on the other hand, haven’t really been worthy of America’s hatred for 20 years… and yet the most recent survey of NFL fans conducted by Public Policy Polling indicates Dallas is still the most hated team in the U.S., and it’s not even close.

The reason is that, even though today’s Cowboys players are a fairly likable bunch, the teams in the 1990s were so riddled with complete scumbags — highlighted by receiver Michael Irvin’s classic cocaine-and-strippers-fueled arrest — that America still hasn’t forgotten about them.

Making matters worse, the Cowboys and their fans seem to love trolling America by referring to the franchise as “America’s team” despite the fact that most Americans would rather have their teeth smashed in with a hammer than cheer for them.

All weekend, I had visions in my head of more than 100 million people across the United States engaging in the single greatest bloodthirsty hate-watch spectacle since the days of Roman gladiator fights to the death.

The thought of tens of millions of my fellow countrymen spitting out chunks of chicken wings and nachos from their mouths while screaming with rage at both teams on Super Bowl Sunday was too funny to not relish. Given how most Americans feel about both franchises, the only acceptable outcome for such a game would have been if the stadium’s turf cracked wide open and Satan’s gigantic hands had surged through to drag both teams into hell.

Upon further review, Bryant’s catch was ruled incomplete and the Cowboys’ season was effectively over. And to make matters worse, three of the teams left — the Packers, the Seahawks and the Colts — are quarterbacked by affable guys who seem to exude wholesome all-American values, although the Seahawks’ boastful Richard Sherman-led secondary pretty much erases Russell Wilson’s sickening niceness.

Ah well. The wonderful thing about the NFL is that there’s never been a shortage of disgusting teams to root against. And once Brady and Belichick retire, the Baltimore Ravens this year have shown they have what it takes to fill the void.