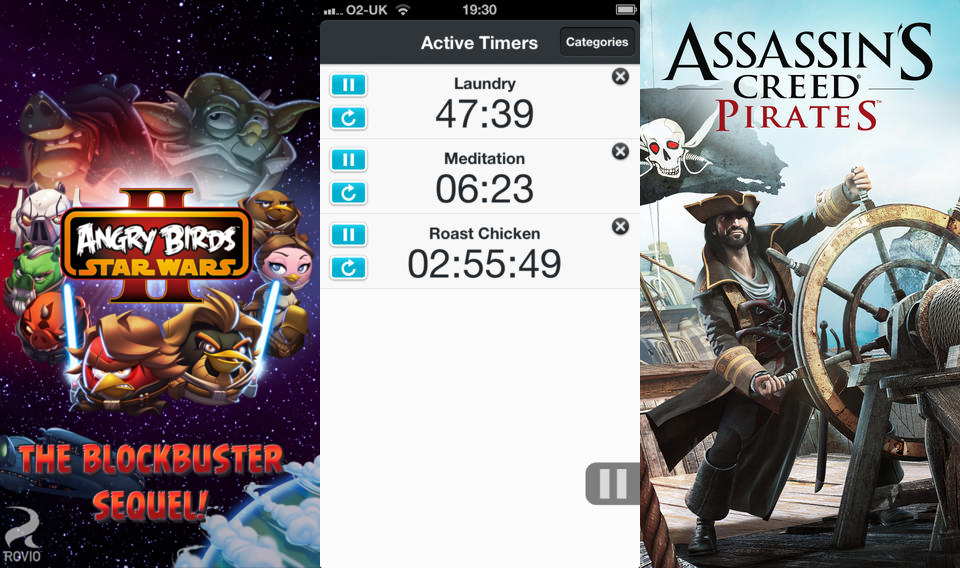 This has already been quite a week for iPhone and iPad app sales, and today we have some big ones for you. We don’t cover many iOS games in these posts because there are just so many of them and they constantly see price changes. Today, however, we have two big ones to share with you along with a nifty utility.

This game obviously needs no introduction.

The Force is strong with this one. Get ready for Angry Birds Star Wars II – the epic follow-up to the #1 smash hit game! Based on the Star Wars movie prequels, use the Force for good against the greedy Pork Federation or choose a much darker path. That’s right; for the first time ever you can “Join the Pork Side” and play as the fearsome Darth Maul, Emperor Palpatine and many other favorites!

JOIN THE PORK SIDE! For the first time ever play as the pigs! Wield Darth Maul’s double-bladed Lightsaber, or play as Darth Vader, General Grievous and other villains!

TELEPODS! A groundbreaking new way to play! Now teleport your favorite characters into the game by placing your Angry Birds Star Wars Telepods* figures on your device’s camera!

BECOME A JEDI OR SITH MASTER! So many Bird and Pork Side levels to master, plus a bonus reward chapter and a ton of achievements to unlock!

SWAP CHARACTERS AS YOU PLAY! Switch characters in the slingshot at any time – yours to earn or purchase!

ToonsTV READY TO GO! The home of the hugely popular Angry Birds Toons animated series, plus many other top-quality videos!

Become one of the most feared pirates of the Caribbean in this exclusive Assassin’s Creed adventure on smartphones and tablets!

Play as Alonzo Batilla, a young and ambitious captain, a pirate eager to take on the fiercest of enemies…

Break all the rules, challenge empires and make your own fortune!

ENGAGE IN BRUTAL NAVAL COMBATS
Fight in real-time naval battles all over the Caribbean Sea.
Choose from a wide range of weapons to destroy your enemies and become a true pirate legend!

BUILD UP YOUR CREW AND YOUR SHIP
Acquire the most iconic boats of the Golden Age of Piracy; ranging from the smallest gunboat to the Man O’War floating fortress
Upgrade your vessel using the massive bounty plundered from your encounters
Recruit the finest crew members and learn more than 50 new pirating techniques to become a better captain and the true master of naval combat.

DISCOVER GROUNDBREAKING 3D VISUALS ON MOBILE AND TABLETS
Changing weather conditions directly impact the gameplay and redefine every landscape.
Beware of storms and of the treacherous fog that will conceal your enemies until the last moment!
Bask in the West-Indies sunshine, admire beautiful sunsets and sail through the night along breathtaking coastlines.

EXPLORE THE IMMENSITY OF THE CARIBBEAN
Sail throughout a vast array of islands as you explore a Caribbean huge map
Enjoy more than 50 story and side missions, search for nearly one hundred treasures and lost parchments and compete with your friends for the highest bounty.

EMBARK ON AN EPIC QUEST FOR A LEGENDARY TREASURE
Live an adventure that will reveal the truth about La Buse’s mysterious lost treasure.
Cross paths with Assassins and Templars and take part in their age-old struggle.
Meet the most notorious and colorful pirates of the era, including Sam Bellamy, Ben Hornigold and Blackbeard!

Assassin’s Creed Pirates is a universal app for the iPhone and iPad, and it’s normally $4.99.

Is a smartphone really all that smart if it can’t help you out by running multiple timers at the same time? This app is here to help.

Set an unlimited number of your own Timers.

Features:
*Easy to Use
*Times in Hours, Minutes & Seconds
*Repeat, Restart each timer
*Custom alerts for each timer
*Categorise and sort timers into custom groups
*Add custom icons to personalise Timers
*View all active timers
*Start & Stop all timers with one button

EXERCISE: Let Timer Flo keep track of when you’re due to move on to your next workout set or when you’ve been on the treadmill too long.

STUDY: Timer Flo can time when you’ve done that 60 minutes of hard work you’ve been planning all day.

PLAY: Have a party game where you need to time people to do certain things? Use Timer Flo and easily restart and repeat Timers.

Times Flo Pro is normally $1.99 but it’s free for a limited time.