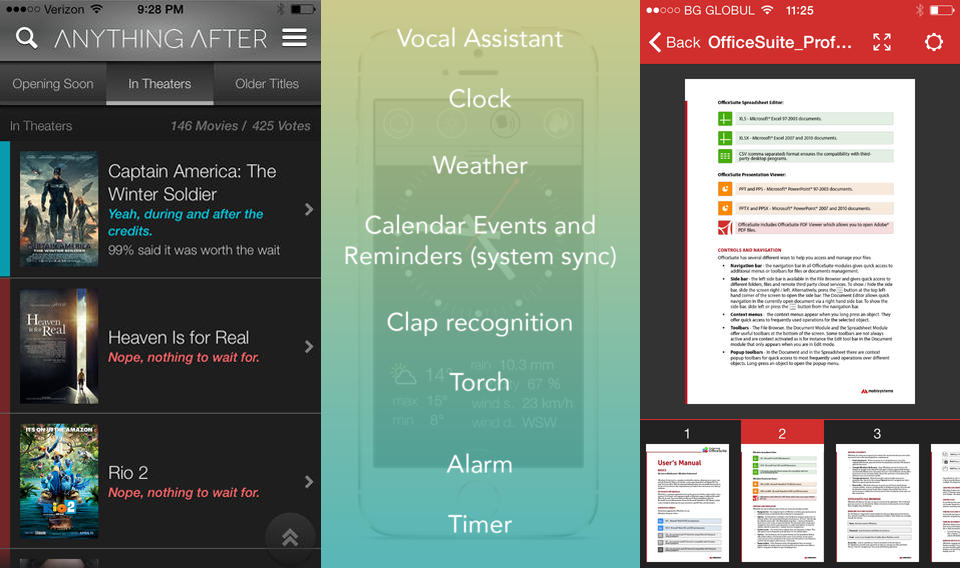 Today, we have three paid apps to tell you about that each hit one or more of these important points, and they’re all available to download for free right now. As is always the case, however, these sales are only available for a limited time. If you see something you like, be sure to download it right away.

First and foremost, we have OfficeSuite Professional by Mobile Systems, a $15 value that can be had for free right now.

This full featured productivity suite has gone on sale a number of times in the past, but this is only the second time since it was first released in July 2013 that OfficeSuite Pro has been made available for free.

In other words, don’t expect another opportunity to pop up in the near future if you miss this limited-time sale.

OfficeSuite Professional is a universal app designed for iPhones and iPads.

Anything After is a very smart app for movie fans who enjoy going to the theater to catch new films as they’re released. When you’re watching movies at home, it’s easy to skip the credits at the end to see if there is any hidden footage at the end. In a theater, however, you have no choice but to sit and wait — until now.

Ever gone to the movies and wondered, “Is there anything after the credits?” Anything After answers that exact question! Save yourself from missing a bonus scene or waiting for no reason + more.

• Quickly find out if there’s a post-credits scene (stinger) after the movie – without having to wait – right on your phone! — Like bloopers or a bonus scene that hints at an awesome sequel.
• See if it’s actually worth the wait.
• Access to moviegoer provided comments and spoilers.
• WATCH trailers and the after credits SCENE right on your phone!
• New movies added daily!
• Beat the traffic and the long line at the restroom, especially if you know there’s nothing you might miss during or after the credits ~ your bladder will thank you after that extra large drink.
• AND also see if there’s anything to wait for while watching a new DVD or Blu-ray release in the comfort of your own home.

This great universal app by Damien Dalli is normally $1.99, but it’s free right now for a limited time.

Not all alarm apps are created equal, and Vocalarm Pro by Alfonso Piazza is one of the most novel and useful alarm apps we’ve seen.

Vocalarm is the first alarm-app in the world to introduce a CUSTOMIZABLE VOCAL ASSISTANT!

It can give you many info:
• Current Date and Time
• Calendar Events and Reminders (system sync)
• Current Weather and Forecasts (it support both C°-Km/h and F°-Mph):
– weather conditions
– temperature (current-min-max)
– rain amount
– humidity percentage
– wind (speed and direction)
• It’s possible to set a Custom Phrase (write it in the apposite box)
• It can also call you by name (insert it in the apposite box)
• If a timer is set, the vocal assistant can tell you the remaining seconds to the end of it

Vocalarm Pro is normally a hefty $3.99, but it’s currently free for a short time.