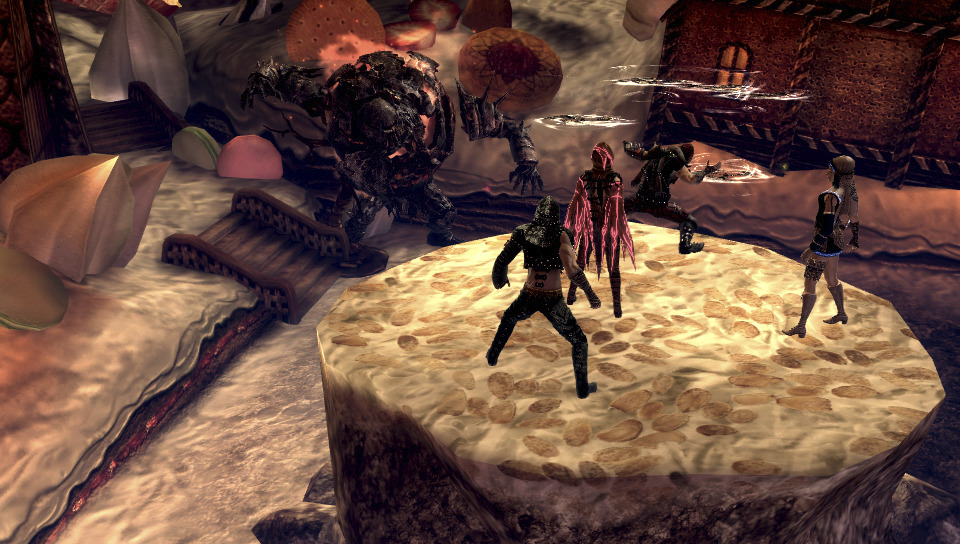 Soul Sacrifice Delta is not a sequel to the PS Vita exclusive title that preceded it, but more like a director’s cut. All of the original content is intact with a few substantial additions which make this a tempting offer for fans of the original. If you never got around to playing the first release of Soul Sacrifice, you should think twice before discounting this as another Monster Hunter rip-off.

In Soul Sacrifice Delta, you take on the role of an innocent man, soon to be sacrificed by the all-powerful sorcerer Magusar. After a nearby prisoner breaks free from his own cage, a scrabble breaks out, leaving a talking book stranded in the rubble that remains. You character crawls toward the book, freeing it from under the wreckage. This book, Librom, once belonged to another sorcerer, but now you have been given the opportunity to relive his adventures (known as Phantom Quests) in order to gain the power necessary to defeat Magusar.

As with its Monster Hunter-like peers, Soul Sacrifice focuses on combat while putting every other facet of the game on the back burner. Equipped with dozens of fascinating “Offerings” (as the weapons and spells in the game are called), your increasingly powerful sorcerer-in-training can heal himself, summon axes and swords, launch mortars into the air and even transform into an intimidating creature.

Even after having just jumped back into the world of Borderlands 2 for a review of the PS Vita port, I was still impressed with the enormous breadth of interesting weaponry to choose from.

Leveling up is one way that Soul Sacrifice differentiates itself from a typical RPG. Rather than receiving experience points for killing enemies, you gain either life or magic experience based on whether you decide to save the enemy’s soul or sacrifice it. This makes leveling a much more active part of the game, but even that is turned on its ear by the Fate option which has been added to Soul Sacrifice Delta, allowing your character to split the experience down the middle for both life and magic experience at the cost of randomized rewards.

Although the story takes a backseat to the combat system, there’s still a interesting plot to follow if you’re willing to plod through the written dialogue. There are no cutscenes in Soul Sacrifice — instead, you’re offered a few pages of voice-acted text after every mission you complete to fill in some character development and world building. Compared to other games in the genre, it’s a welcome addition, but it does delay the action.

The levels feel a bit claustrophobic at times, which wouldn’t be as troublesome if they were more diverse. You’ll find yourself battling through the same environment mission after mission, a shame considering how much talent the artists have on display with the monsters that populate the levels.

Many of the missions feel almost automatic, especially early in the game. Enemies are sluggish and predictable, leaving themselves vulnerable to just about anything you throw at them. They become more challenging in later missions, but the real challenge comes in the form of boss fights. At the end of every set of Phantom Quests, and often throughout them as well, you’ll face off against enemies far more resilient than the grunts that fill out the rest of the game. You’ll have to make use of all the Offerings you have equipped for many of them, switching between ranged and melee attacks to neutralize them.

There’s a worthwhile online component to the game as well, allowing you to team up with other sorcerers in side missions which grant you rewards similar to what you would receive from the main Phantom Quests.

The most significant addition to Soul Sacrifice Delta appears to be the Grim faction missions. If you can’t guess from the name, each of these missions draws inspiration from a Grimm fairy tale, such as Little Red Riding Hood or Snow White and the Seven Dwarves. It’s a smaller group of missions than the other factions offer, but it’s a nice change of pace from the dark tone of the Avalon and Sanctuarium faction quests.

Another addition is the Bazaar Ledger, a shop run by Carnatux, one of the protagonist’s many allies. At this shop, you’ll be able to purchase raiment items, exchange rumors, have your palm read and receive gifts from other players.

If you’ve been looking for a competent hack-and-slasher for your PS Vita, Soul Sacrifice Delta is the definitive version of an already great game. The repetitive nature of the Phantom Quests can wear a bit thin at times, but being able to consume the game in bite-sized portions makes this a perfect portable title for your collection.