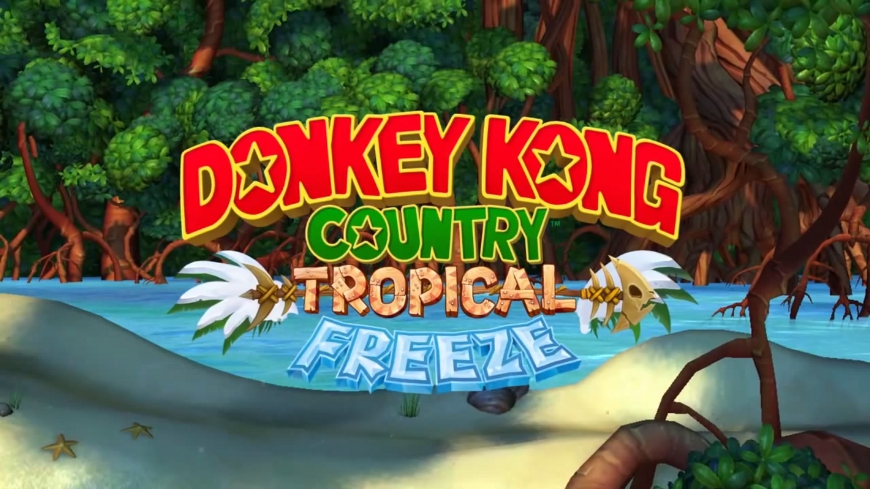 In many ways Donkey Kong Country: Tropical Freeze is as faithful of a sequel to the beloved Super Nintendo series as any fan could hope for, but despite the eye-popping visuals and controller-clenchingly tense mine cart rides, this sequel comes apart at the seams.

For the uninitiated, Donkey Kong Country is one of the few Nintendo platformers that took an extended leave of absence despite its popularity, fading into the backdrop as Mario, Samus and Kirby stole the spotlight in subsequent console generations. DK was mostly relegated to a supporting role in the Nintendo universe, but all of that changed when Retro Studios took up the mantle in 2010 with Donkey Kong Country Returns.

Tropical Freeze is a direct follow-up to DKC Returns, and even with over three years between releases, the sequel still feels a bit stale. As with most Nintendo platformers, Tropical Freeze features a bare bones story: Viking-like Snomads invade Donkey Kong’s peaceful island, so he and his friends are forced to reclaim the land one stage at a time.

If you’ve ever played a DKC game before, Tropical Freeze should be familiar territory. Donkey Kong can jump, roll and pound his palms on the ground to take out enemies and traverse the treacherous caves, jungles and rivers scattered around the island. The titular gorilla can also call upon Diddy Kong, Dixie Kong and Cranky Kong to provide support. Diddy is equipped with a jetpack, giving DK a little extra distance on his jumps. Dixie can spin her ponytail to ascend ever so slightly, giving DK access to otherwise unreachable areas. Cranky brings along his trusty cane, allowing DK to bounce over hazardous surfaces.

If you’re having difficulty getting through the levels without any assistance (as I was), there is a shop in between every set of stages that sells consumable items. You can give DK an extra heart on top of the two he starts with; you can pick up Diddy, Dixie or Cranky before you start a level, saving yourself the trouble of having to find them within the stage; some items will save you the next time you go barreling off a cliff or stay underwater for too long. These items can be purchased with coins, one of the many collectibles DK will find on his journey.

The stages are broken up into several categories. Most are standard platforming fare, filled with precarious logs, trees and walkways for DK to hop between. Many of the levels feature a water element, requiring DK to swim (sluggishly) through waves of unfriendly fish, battling against the current. My favorite stages put DK behind the wheel of a vehicle, either a barrel fashioned into a rocket or the classic mine cart.

The vehicle stages not only broke up the increasingly difficult platforming, but I felt more in control in a mine cart or a rocket than I ever did with the gorilla. These stages were often the most visually impressive as well, giving the level designers an opportunity to let loose and destroy huge portions of the stage without hindering the player.

Every set of stages ends with a boss fight. Similar to the vehicle stages, I felt that the confined locations that housed the boss fights were better suited to the controls than the sprawling stages. Each boss battle takes an unreasonable amount of time to complete, but they telegraph their weaknesses and force you to think on your feet. Every time I had to restart a boss battle, I felt better prepared.

The game also features multiplayer, but we found ourselves failing twice as often when we tried to run through the stages together. My co-op partner eventually settled for jumping on to the back of Donkey Kong, putting his controller down and letting me finish the stage. Needless to say, he didn’t want to play again the next day.

Here’s the deal: the difficulty spike relatively early in the game nearly frustrated me to the point of giving up. A single wrong step, a mis-timed jump, a moment of hesitation — any mistakes will send DK hurtling to his death. When I play platformers, I expect a certain amount of challenge. Super Mario 3D World is such a joy to play — mechanical, visually, aurally and otherwise — that the lack of difficulty can be excused. Rayman Origins and Rayman Legends are a bit more demanding, requiring quick reflexes and a touch of intuition. Super Meat Boy will rip your heart out, chew it up and spit it out before you finish the first set of levels, and yet two factors tie all these games together: tight controls and a sense of progression in spite of failure.

Donkey Kong Country: Tropical Freeze does not control well. I played through a majority of the game on the Wii U Gamepad before switching to a Wiimote, but it didn’t seem to make a difference. My button presses frequently failed to register, resulting in a lost life and a ceremonial hanging of the head. Even when the controls were functioning properly, I still never felt like I had a solid grasp of DK’s movement. Hours into the game I was still missing jumps that I would have sworn I could make and I was still landing inches in front of an enemy only for the hit to register an instance before I could react.

When I play those other platformers, I feel like I’m learning every time I fall off a cliff or crash into a foe. In Tropical Freeze, I just had to pray I’d make it to the end of the level before I ran out of lives.

I am willing to admit that I may have not been fully prepared for what the new Donkey Kong Country had to offer going in. I’ve played every other entry in the series, and I had a great time with Donkey Kong Country Returns, but I could never break through the icy wall of Tropical Freeze. If you’re looking for a game on the Wii U that’s going to fight back, this one’s a prime candidate, and nice looking to boot, but it just wasn’t for me.