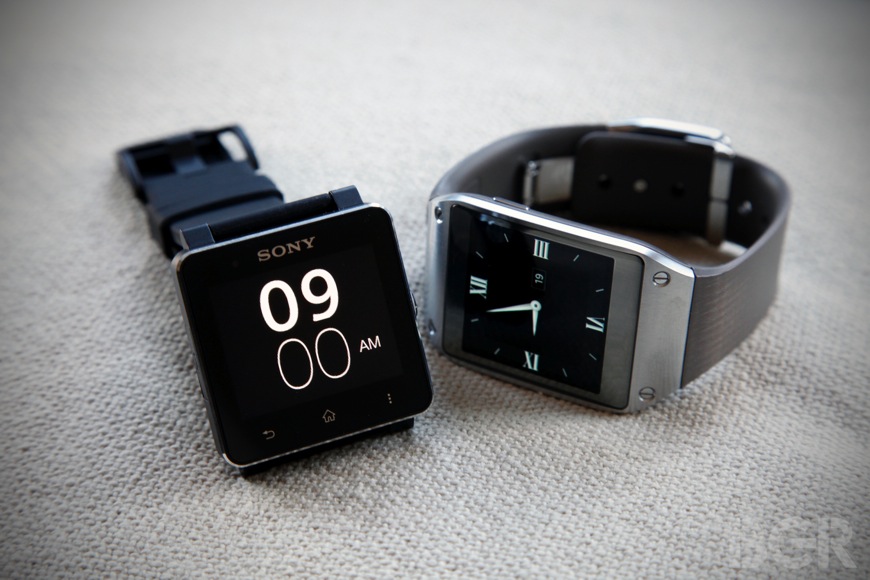 Smartwatches are the future… or something like that. As growth in the smartphone market slows, especially at the high end where companies have been making a killing, consumer electronics giants need to look elsewhere to bolster earnings growth. For Samsung, Microsoft, Google, Sony, LG and maybe even Apple, that “elsewhere” is wearable computing.

The wearables category definitely has legs but know one knows where it will end up going. Are fitness bands the future? Will consumers clamor for connected eyewear? Or will top companies dump enough marketing dollars into smartwatches that we all forget how geeky they are and ditch our Tags, Fossils, Rolexes, Tissots, Seikos, Citizens, Bulovas, Breitlings, Weils, Cartiers, IWCs, Panerais, Jaegers, Omegas, Hamiltons, Ebels and Hublots in favor of a digital watch tied to a smartphone?

The highest profile smartwatch launch to date was definitely Samsung’s Galaxy Gear debut this past October. We found that the connect wristwatch felt like a rushed answer to a question Apple hasn’t even asked yet when we reviewed the Galaxy Gear. As for how consumers responded, we have no idea — Samsung has shipped more than 800,000 Gear smartwatches so far but we have no idea if people bought them or if they’re just sitting in warehouses and on store shelves.

Sony actually launched a smartwatch long before Samsung got around to it. Two smartwatches, actually. The company’s more recent offering was called the “SmartWatch” and it launched in April last year. While the design wasn’t exactly head-turning, it was a pretty decent effort at the time.

Now, Sony is back for round three. The company launched the SmartWatch 2 in the U.S. in October and I have had a review unit since then but as busy as the past couple of months have been, I didn’t have a chance to write about it until now.

Since Samsung’s Galaxy Gear is the biggest smartwatch launch to date, I have decided to put together a direct comparison between the two watches rather than post a typical review. The Gear sets the bar, however high or low it might be, and it is Sony’s main competition with the SmartWatch 2.

So if you’re planning to buy one of these leading smartwatches ahead of the holidays this year, which one should it be?

Here’s how Sony’s SmartWatch 2 is better than the Samsung Galaxy Gear:

Universal compatibility: This is an obvious point in the plus column for Sony’s SmartWatch 2.

When the Galaxy Gear launched it worked only with the Galaxy Note 3. One… single… smartphone. The situation has improved since launch and the device now works with several popular Samsung phones like the Galaxy S4, Galaxy S III and Galaxy Note II thanks to some updates.

Price: This one is pretty straight forward.

Battery life: Another area that is quite straight forward.

When I tested Sony’s SmartWatch 2 last month I got about four days of use out of each charge. Sony said at that time to expect between three and four days of battery life per charge, so I came in at the high end of that range. The company also just began rolling out a big firmware update, however, and it will extend the device’s battery life even further.

Samsung’s Galaxy Gear smartwatch lasts for a little more than one day on a full charge.

Standard microUSB charging port: This one is huge for me.

The Galaxy Gear ships with an awful clam shell cradle that is needed to charge the device. There’s a standard microUSB charger that plugs into the cradle, and then the cradle is closed around the watch to charge it.

It’s a very bad design, and owners get a painful reminder of how bad it is each and every day since the Gear needs to be charged daily. You can read more about how it works and see it in action in my Galaxy Gear review.

Apps: Samsung’s Galaxy Gear is very limited when it comes to apps, and Sony has taken the opposite approach — the more, the merrier.

Sony’s Smart Connect app manages the connection between the SmartWatch 2 and the user’s smartphone, and it also serves as a portal through which users can find both free and paid apps. Apps are actually housed in the standard Google Play store.

The number of available apps continues to grow slowly but steadily, and there are definitely some decent offerings in there. Also, those who purchase the SmartWatch 2 with the silicon band ($199.99) as opposed to the metal band ($219.99) will get RunKeeper’s custom SmartWatch app for free.

No camera, no voice controls: Sometimes less is more.

Voice recognition on Samsung’s smartwatch allow users to send messages, make calls and more by simply speaking to the watch. Sony’s watch does not have this capability.

So why is this a point in Sony’s favor?

The experience of talking to your watch is simply awful. In public, at home with just your family or even alone in your house or car — it’s beyond uncomfortable. Matters are compounded by the fact that Samsung’s “S Voice” solution is very poorly made and slow. Everything about the experience is just terrible.

The same goes for the camera.

You could contort your arm, stick out your elbow and tap your watch to take a fuzzy, grainy photo, or you could take your smartphone out of your pocket and take a high-quality photo. The latter is always the correct choice.

An Ingress Protection (IP) rating is given to electrical devices to signify how resistant to water and dust they are. The first digit that follows “IP” represents a device’s dust resistance rating and the second digit signifies how resistant it is to water.

Sony’s rating of 5 means the SmartWatch 2 is very well-protected against dust.

For water resistance, the scale goes from 0 to 8 where 0 means a device hasn’t even been evaluated and 8 means a device can withstand continuous immersion under water.

The SmartWatch 2’s rating of 7 means a splash of water or heavy rain are no problem at all for the device. In fact, it can be fully submerged for about 30 minutes in up to three feet of water and come out just fine.

Interchangeable straps: Want to sport a different look from one day to the next? The SmartWatch 2 can use a variety of different bands sold by Sony or it can take any standard watch strap that is 24 millimeters wide. Because the Galaxy Gear’s camera and speaker are built into the strap, no such luck on Samsung’s smartwatch.

Here’s how Sony’s SmartWatch 2 is worse than the Samsung Galaxy Gear:

Hardware design: The SmartWatch 2 is not an ugly device, but it’s no Galaxy Gear.

To be frank, there weren’t very many good things to say about the Galaxy Gear when we reviewed it. Among the positive notes, however, was the device’s design.

Aside from the hideous camera lens on the front of the strap, Samsung’s Galaxy Gear is a very sleek and well-designed device. The stainless steel case has a great look to it and the exposed screws above and below the face are a very nice touch.

The SmartWatch 2, on the other hand, is somewhat bland. It’s far better than Sony’s previous SmartWatch but it really isn’t anything special.

There’s really no way to sugarcoat this: The UI is hideous.

Sony tried to mimic the standard Android interface with the SmartWatch’s UI and the company did a reasonably good job because it does bear a pretty close resemblance… to Donut.

It’s not pretty. Icons look like they’re from last decade and the low-resolution display really isn’t doing them any favors. Sony also doesn’t let you change the wallpaper, which is very annoying.

There are some poor design choices with key interface elements as well. For example, you cannot arrange apps on your home screen manually. You can either arrange them alphabetically — which is quite odd considering app names are not displayed beneath icons — or in order of most frequently used to least used. The latter was my choice, but it would be nice to have the ability to arrange things however I want.

On the other side of the fence, the UI on Samsung’s Galaxy Gear is pretty terrific. It makes great use of contrast and it is very minimal, with nice big icons and tap targets.

It doesn’t work. The idea is to adapt the interface, not just scale it.

Messaging limitations: When text messages come to your phone, the SmartWatch 2 displays a notification just as it should. Replying to these messages without using your phone is something of an issue, however.

Sony’s smartwatch doesn’t support voice dictation or any other kind of manual text input. As a result, you can’t reply to texts with a message created on the fly.

The solution on the SmartWatch 2 is a collection of canned responses that the user can create and edit on a connected smartphone. The idea is to create a series of common responses so that you can quickly select one and reply to a wide range of messages without taking your phone out of your pocket.

Voice dictation on the Galaxy Gear isn’t the right solution, but neither is this. I’m not sure what is — perhaps it’s simply pulling out your phone and typing on it. Some will argue that this defeats the purpose of a smartwatch, which should help users to take out their phones as infrequently as possible. I’m not so sure.

Perhaps smartwatches should focus a bit more on finding the best way to present users with information and leave interacting that information to smartphones, for the most part at least. There are some scenarios where controls on a smartwatch are desirable — music controls while jogging, perhaps TV or home automation controls — but right now, with today’s technological limitations, maybe there are certain things smartwatches shouldn’t do.

The simple truth is that smartwatches still have no idea what they want to be when they grow up.

Holiday shoppers deciding between these two smartwatches have something of a difficult task ahead. The main question, really, is one of form or function.

Do you want a great looking smartwatch that only works with a handful of phones and has too many functional shortcomings to count on two hands? The Galaxy Gear is perfect for you and I’m sure there are still plenty in stock at your local electronics store.

Would you rather have a less attractive watch with a wider range of functionality, albeit it hidden behind a UI that belongs on a smartphone from 2004? Sony’s SmartWatch 2 is ready and waiting to make its way to your wrist.

At $200, Sony’s third smartwatch effort is a fair one. Like Samsung’s Galaxy Gear, however, it likely doesn’t represent the “smartwatches” that may someday proliferate and become the commodity smartphones are today.

We’re still in the early days of this emerging category — and it shows.