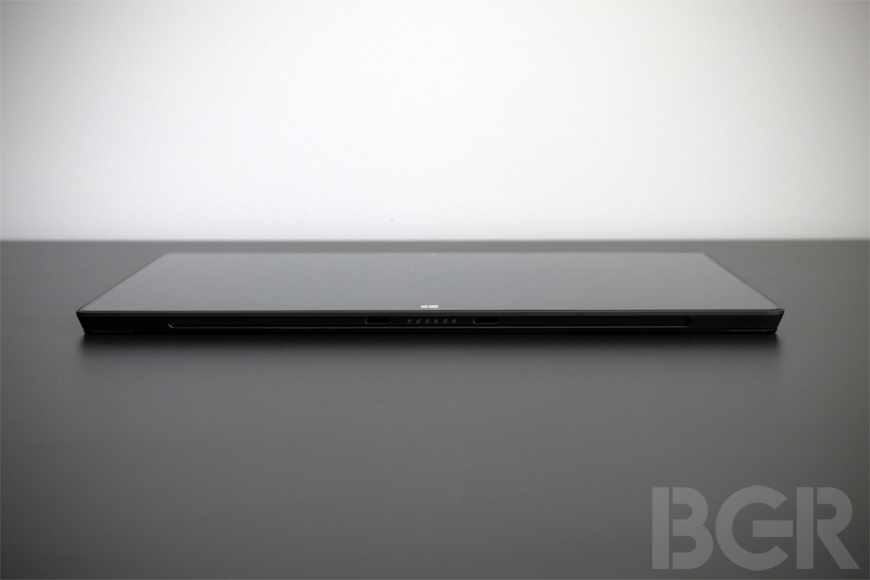 Microsoft (MSFT) announced pricing for its upcoming Surface Pro tablet last week and tech bloggers’ heads immediately exploded. The Surface Pro — Microsoft’s first own-brand Windows 8 offering — will start at $899 for a unit with 64GB of internal storage. That price includes a stylus, an accessory that will be appreciated by some potential users but certainly not all, but it does not include a Touch Cover or a Type Cover keyboard. Microsoft’s unique keyboard cover accessories are one of a few key differentiating factors that help set Surface tablets apart, so many viewed this omission as yet another strike against the Surface Pro.

We’re now in the early stages of a major transition at Microsoft, and early sales of the company’s first tablet are not shaping up to be impressive. I saw potential in the Surface tablet with Windows RT when I reviewed it in October, but when I revisited the slate after a month of usage I noted that more than anything else, the Surface with Windows RT got me excited for the upcoming Windows 8 version of Microsoft’s tablet.

I have to admit, though, that I’m much less excited about the Surface Pro now that I know how much it’s going to cost.

Taking a step back for a moment however, is the Surface Pro really that expensive? We’re not talking about some light-duty media tablet here, we’re talking about a full-featured, cutting-edge notebook computer that just so happens to also be a tablet. It runs a full desktop operating system, it’s powered by a third-generation Intel Core processor, and it’s one of the thinnest and lightest devices in its class.

Let’s take a look at the Surface Pro alongside a true competitor — a device with a full desktop operating system, a premium metal enclosure and similar specs — to see how the Surface Pro’s pricing really shapes up against the competition:

On paper, pricing for the Surface Pro is absolutely within the realm of reality — even when including a $119.99 Touch Cover, it’s only $20 more expensive than comparable 11-inch MacBook Air notebooks from Apple (AAPL). This is a premium tablet/notebook hybrid device that is thinner and lighter than a MacBook Air despite including high-definition display with multitouch support, dual cameras, a microSDXC memory card support and more.

Of course, there’s one important difference between the MacBook Air and the Surface Pro that cannot be overlooked: Apple’s MacBook Air is the most popular notebook computer in the world being sold by the biggest consumer electronics vendor in the world. The Surface Pro is Microsoft’s first piece of Windows 8 hardware that is launching at a time when Windows 8 needs a break.

Microsoft has shown that it isn’t willing to take a hit on hardware in order to move units. Some think that this is a bad move on the company’s part, and that Microsoft should be focused entirely on sales volume regardless of how lower pricing might devalue it products, and regardless of what implications it might have for Microsoft’s partners. Others think that Microsoft is merely setting a standard for its OEM partners, and unit sales aren’t such a big deal.

In the end, Microsoft has a tough road ahead. The idea that Microsoft is spending millions upon millions of dollars and several years of research and development simply to release a few devices that push its vendor partners to up their game is ridiculous. Microsoft is shifting its strategy to become more like Apple. It wants to take ownership of the user experience from top to bottom, and it wants to do so with gaming hardware, with tablets and PCs, and with smartphones.

This is an interesting play by the world’s biggest software company and it seems to be banking largely on the fact that its OEM partners have no alternatives. Windows owns more than 91% of the global PC market right now and it will likely continue to be the world’s most popular desktop operating system for some time. If Microsoft can realize its vision of offering an Apple-like experience while still maintaining its arrangement with other OEMs and keeping a 90%+ stranglehold on the global PC market, the company’s future will be an incredibly bright one.

In the meantime, Microsoft’s early hardware plays are a tough sell. The Surface Pro is priced competitively on paper, but in the market it’s going to be a tough sell just like the first Surface tablet. How Microsoft rebounds later in 2013 and reworks its strategy as new own-brand hardware rolls out — whether that means entering the market at lower price points or making other adjustments — will be one of the most interesting upcoming stories in tech.