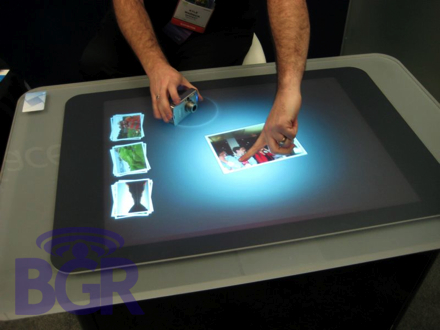 Remember the Microsoft Surface? It sports a multi-touch interface that is impressive enough to make even the Apple fanboy a little jealous. We got a chance to preview some of the Surface’s many potential real-world applications, and came away surprisingly impressed with the tabletop computer. It’s essentially one massive touchscreen. The Surface we saw was fully functional, and we witnessed a number of impressive demonstrations. First was a simple but effective implementation of Microsoft Paint. The program has been reworked to respond to different types of input. Changing from a finger to a paint brush produced different types of brush strokes without having to fiddle with any settings or menus. The media application provided smooth and effective photo and video management and display, with iPhone-life “squeeze and pinch” controls for zooming and scaling. The final demonstration provided a window into future integration with T-Mobile’s retail environment. Placing different T-Mobile devices on the Surface brought up handset information, rate plan info, and more, all with the option to purchase and configure your new handset without having to deal with a customer service representative. It even allowed for dynamic device comparison when two or more handsets were placed on the screen. All in all, this is going to be a beast to contend with as we move towards the 2010 official release date. Check out the finger-lickin’ photos in the gallery, peeps!

Click on over to our CES: Microsoft Surface gallery!