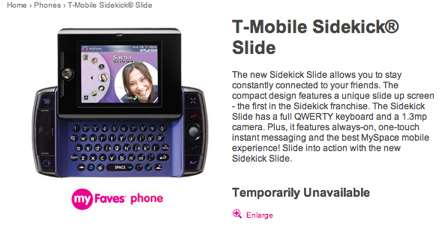 Giz is reporting that the Sidekick Slide has pulled from T-Mobile. Various reports are coming in about the handset disappearing off T-Mobile’s site, and other insiders have said that the Slide has been yanked. From our brief visit to T-Mobile’s website, the Sidekick Slide simply lists as “Temporarily Unavailable.” Whether this means they have temporary pulled stock to fix the major “slide” issue we first reported on, or are actually discontinuing the device is unknown. This can’t bode well for Danger’s relationship with Motorola, can it? Flip it up! Flip it up! Flip it up!

“T-Mobile USA suspended sales of the T-Mobile Sidekick Slide™ on Friday evening, Nov. 16, after Motorola – the manufacturer of the device – confirmed that some devices may inadvertently power off when the slide door on the front side of the phone is opened or closed.

T-Mobile has taken this action to help ensure our customers only receive devices we’re confident will perform at their peak, so they can stay effortlessly connected to those who matter most.

Motorola is currently working to identify the root cause of the power cycle issue in affected Sidekick Slide devices.  The T-Mobile Sidekick LX™ and Sidekick iD™ are not affected by this issue.

If a customer purchased a Sidekick Slide that is experiencing the unintended power cycle issue, they may contact T-Mobile Customer Care, or go to a T-Mobile retail store, for assistance and to discuss available options.”

UPDATE 2: We received word that any Sidekick Slide owners that report the power issue will receive a free upgrade to the Sidekick LX with free express shipping. You won’t have a color choice, though. You’ll get the blue LX.