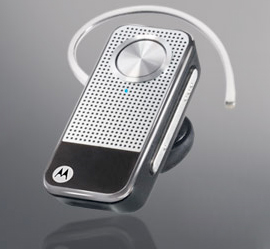 Motorola went and announced their H12 Bluetooth headset just now, and it’s the first headset to feature CystalTalk, previously found only in some of their handsets. It supposedly was designed with “TrueComfort” which should alleviate those awkward irritating moments when wearing a Bluetooth headset for longer than 5 minutes. They didn’t just stop there, though. The actual headset (we’re talking about a headset, not a phone, OK?) comes with a matching desktop charger, charging case, and even a shirt clip so you can rock it all day, everyday, just like Busta Rhymes. We heard it will initially be only available through AT&T stores, so what do you say Moto? You’ve got our address! Full specs, after the jump!

UPDATE: Beginning today, the MOTOPURE H12 will retail for $99.99 after a mail-in-rebate at AT&T stores.