Sprint likes to get Touched by HTC 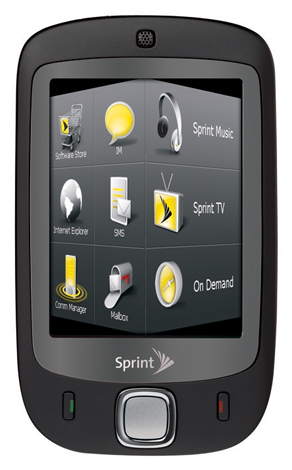 Better late than never, we suppose. Sprint has just gone ahead and made the HTC Touch official on their network this morning. Since it’s Sprint, you can be sure you’ll fine the Sprint Music Store, SEE, and Sprint TV on the device, just in case you get bored watching your own TV on your Slingbox. In terms of tech specs, the HTC Touch hasn’t been too molested. It features a 2 megapixel camera, MicroSD card support, Windows Mobile 6 Professional, TouchFLO, A2DP, and obiously no keyboard. If you’re just bouncing in your chain waiting for the Sprint Touch, you’ll have to wait till it is available on November 4th for $249.99 with a two-year agreement and $100 mail-in rebate. Full press release, after the jump!

With an easy finger swipe, Touch by HTC™, exclusively from Sprint,
offers both business and personal essentials with an easy-to-use interface

Available November 4; Sign up to be first in line at http://www.sprint.com/touch

Touch by HTC leverages the broad functionality of Windows Mobile 6 with Outlook Mobile for smooth email integration, Office Mobile, Windows Live and the ability to run thousands of third-party applications. It also allows users to surf the web with Internet Explorer®, send and receive emails, chat on Messenger and send files to their own web space through Windows Live®. The home screen provides one-touch access to email, text messages, calendar appointments and contacts, as well as current weather conditions and forecasts for hundreds of cities around the world.

Versatile and compact, Touch by HTC provides quick and easy access to Sprint-exclusive content, including:
•    Sprint Music StoreSM, powered by Groove Mobile, which allows users to browse and wirelessly download full-length songs directly to their phone from a selection of more than 1.8 million songs
•    Sprint Exclusive Entertainment (SEE), the industry’s only made-for-mobile sports and entertainment video programming network
•    Sprint TVSM with more than 50 channels of live and on-demand video and audio.
•    More than a dozen streaming radio stations , including Sprint Radio and SIRIUS
•    On-Demand with up-to-date information on sports, weather, news, money and more customized by zip code.
(Standard data charges apply to all downloads from Sprint.)

“Our customers appreciate the ability to have one device that seamlessly balances both personal needs and business demands,” said Danny Bowman, vice president of product development for Sprint. “Touch by HTC is unlike any other wireless device because it brings together the power of Windows Mobile with easy access to our entertainment applications. This attractive device easily lets you watch news as it happens, respond to email, download your favorite songs and stay connected with the office, family and friends.”

“This device provides a broad set of consumers with the benefits of a smartphone with the style and ease of use they demand,” said Peter Chou, chief executive officer of HTC. “Touch by HTC presents a new, more intuitive touch experience that simplifies access to the most commonly used smartphone features such as dialing, messaging and Web browsing.  It also improves the video and music experience with the addition of Sprint TV and the Sprint Music Store.”

“People want an easy-to-use companion in a mobile phone, freeing them up to leave the office or home and get more done while on-the-go,” said Pieter Knook, senior vice president, Mobile Communications Business, Microsoft Corp.” The Sprint Touch is the result of the strong relationship between Microsoft, HTC and Sprint and offers customers a fun user experience, the power of Sprint’s network and the ease-of-use of Windows Mobile which makes it easy to browse the Web, send email or enjoy your digital entertainment.”

Touch by HTC offers MicroSD card slot that supports up to 4GB – a 512MB card is included with the device. Additional features include a 2.0 MP camera/camcorder with up to 5X zoom, advanced stereo Bluetooth® and Voice-activated dialing.

Touch by HTC measures 4.0” x 2.4” x 0.6” and weighs just 4 ounces. This device will be priced at $249.99 with a two-year subscriber agreement and a $100 mail-in rebate. Standard data rates apply for music and other content downloads.

Touch by HTC will be available on November 4 in all Sprint channels including http://www.Sprint.com and 1-800-SPRINT1. Customers can register to be among the first to purchase Touch by HTC at http://www.sprint.com/touch.