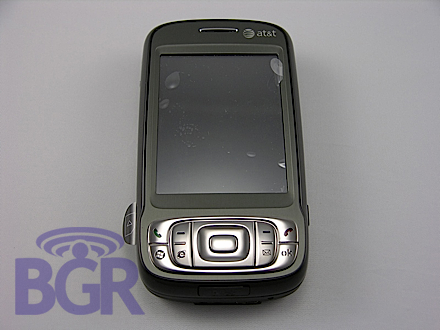 The day has finally come, friends. All the rumors, speculation, unboxings, and other hints on a release date have all been put to silence…Officially announced now and available in stores tomorrow (Friday, the 5th, though we’ve heard reports of some stores getting stock already) — the AT&T Tilt is sure to mess up the game! We got to experience the HTC TyTN II, known as the HTC Kaiser back then, and we had a glowing review based on our hands-on sessions. The great part, in our opinion, after using the AT&T Tilt, is that besides removing the front-facing camera, they have not locked the device down — GPS is not disabled, and to be honest, we kind of dig the AT&T customizations. These are little things like MP3-playing controls on the home screen, organized icons in folders, BlackBerry Connect, TeleNav, all chrome buttons, Push-to-talk, and others. All in all, you put a super Windows Mobile device with HSDPA, a 400MHz processor, 3 megapixel auto-focus camera, tilting screen, and full QWERTY keyboard on AT&T, and you’ve got something really solid in our opinion. Also, the AT&T Tilt has HSUPA; remember that when the rumored network upgrade happens in the next few months…Click on for the full press release and head on over to our hands-on gallery below!

Click on over to our AT&T Tilt hands-on gallery!

Designed by HTC (TSEC:2498), the AT&T Tilt features a 2.8-inch color screen that slides back to reveal a full QWERTY keyboard, then tilts up to position the screen perfectly for reading and creating e-mail, browsing online, using applications or just playing videos and games. The AT&T Tilt supports Bluetooth® 2.0, which allows for up to six Bluetooth devices to be wirelessly connected simultaneously to the device and also supports Bluetooth Stereo.

The AT&T Tilt features the latest version of TeleNav GPS NavigatorTM which provides GPS-enabled turn-by-turn voice and on-screen driving or walking directions, colorful 3-D moving maps and traffic delay alerts with one-click rerouting. New features debuting on the AT&T Tilt include address sharing, which allows users to share their current locations or the location of their favorite businesses with other mobile users. The new version of TeleNav GPS Navigator also includes reviews and ratings for nearby restaurants and allows customers to rate them directly from their AT&T mobile phone. Business users also can use TeleNav Track™, a mobile workforce management solution that includes GPS-enabled tracking, time sheets, wireless forms, navigation, job dispatching and bar code scanning.

Inside the AT&T Tilt, users will have a wireless powerhouse at their disposal. With 3G broadband speed connectivity across the globe and tri-band UMTS/HSDPA capabilities that allow the Tilt to operate in Japan and Korea, customers have access to the more than 135 countries in which AT&T offers UMTS, EDGE or GPRS international data roaming. Customers also can use AT&T’s industry-leading international wireless roaming coverage to make or receive a phone call in more than 190 countries

At home, the AT&T Tilt provides access to AT&T’s BroadbandConnect network in more than 170 major metropolitan areas across the U.S., and coverage outside of 3G service areas is available via AT&T’s nationwide* EDGE network, the largest national high speed wireless data network in the U.S. AT&T’s EDGE network is available in more than 13,000 cities and towns, and along some 40,000 miles of major highways. Users can also connect for an additional charge to Wi-Fi hot spots throughout the U.S. — including any of the more than 10,000 AT&T-owned or branded hot spot locations in the U.S. and tens of thousands more abroad — through the built-in Wi-Fi functionality, supporting the 802.11b and g frequencies. They also can use the AT&T Tilt to link to corporate wireless local area networks or home Wi-Fi networks.

Users will also find the highest-resolution camera available on any AT&T mobile phone today, with 3-megapixel resolution and auto-focus. The device also accommodates 4GB MicroSD flash memory cards and is capable of supporting up to 32GB MicroSD cards to expand storage for pictures, video, music and more.

Windows Mobile 6 provides AT&T Tilt users with the familiar look and feel of their desktop computers at home or in the office. Windows Mobile 6 delivers the ability to view
e-mail in their original rich HTML format with live links to Web and Microsoft Office SharePoint sites, which means text and images are displayed as they would be on a Windows PC with pictures, fonts and colors.

“Around the world, a Windows Mobile phone has become a companion for people that want to do more while on the go,” said Scott Horn, general manager, Mobile Communications Business, Microsoft. “The AT&T Tilt brings a wide variety of options for staying connected to colleagues, friends and family with a familiar and easy-to-use experience and a stylish form factor suited for both the office and a night out on the town.”

All Windows Mobile 6 devices include Microsoft’s Direct Push Technology for up-to-date e-mail delivery and automatic synchronization of Outlook calendars, tasks and contacts through Microsoft Exchange Server. Windows Mobile 6 also offers a set of important device security and management features that include the capability to remotely wipe all data from a device should it be lost or stolen, helping ensure that confidential information remains that way. AT&T has the broadest portfolio of Windows Mobile devices of any U.S. carrier.

In addition to Microsoft Direct Push, the AT&T Tilt will be the first Windows Mobile device in North America to include BlackBerry® Connect™ v4.0 software, which provides BlackBerry e-mail service, security and device management for IT administrators and the benefit for users of wireless synchronization of e-mail, calendar, contacts, task list and memo pad information. BlackBerry Connect v4.0 supports push e-mail for Microsoft Exchange, IBM Lotus Domino and Novell GroupWise through the BlackBerry Enterprise Server and personal e-mail through the BlackBerry Internet Service.

The Johnson City Police Department, located in Johnson City, Tenn., has been using AT&T smart devices for two years and plans to be one of the first organizations to implement the AT&T Tilt later this year. With AT&T smart devices, Johnson City’s 148 officers can verify identification, search criminal databases, issue citations and submit reports from the palms of their hands. Since implementing the smart devices, arrests for criminal activities and revoked drivers licenses in Johnson City have increased, and the time saved handling and processing incidents is equivalent to having five additional officers on staff, according to the police department.

Beyond enterprise functionality, the AT&T Tilt is made for fun and games as well. The device is preloaded with free and premium games and applications including Ms. PAC-MAN, Brain Challenge, Bubble Breaker, Midnight Pool, Solitaire (MS), Tiger Woods PGA Tour 07, MobiTV, and MyCast.

The Tilt provides access to AT&T Mobile Music — an integrated, on-the-go music experience that delivers “your music, your way” by providing simple access to the most robust collection of music content available today, including XM Radio Mobile, which comes pre-loaded on the device and is available for $8.99 a month. The AT&T Tilt will also feature AT&T’s CV streaming video service. Customers can watch a large selection of video clips of their favorite television shows, sports, news and weather, entertainment and premium content, including hit HBO programs and exclusive mobile content from World Wrestling Entertainment.

The AT&T Tilt will be available for a promotional price as low as $299.99** beginning Oct. 5 at AT&T retail stores nationwide, online at http://www.wireless.att.com, at select national retailers and through AT&T’s business-to-business sales organizations. Unlimited monthly data plans for corporate e-mail are $44.99 with a voice contract***. Personal data plans for personal e-mail, begin at $29.99 a month for 20 MB of data***. AT&T also offers an international data plan for the AT&T Tilt — 20 MB in nearly 30 countries — for an additional $24.99 a month. TeleNav GPS Navigator is available for additional monthly charges of $5.99 for 10 trips and $9.99 for unlimited trips. TeleNav Track service plans range from $12.99 to $21.99 for each device.

For the complete array of AT&T offerings, visit www.att.com