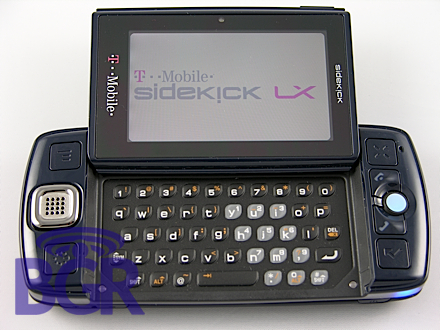 So we (us and Engadget Mobile) leaked the first rendering concepts of the Sidekick LX, BGR also leaked the first live picture of the Sidekick LX, and it would only seem fit that we’re the first to have the device in hand, right? Well, good, because we got one, and we’re loving it! Now to be fair, the actual specs of the Sidekick LX have not drastically improved from the Sidekick 3, and a lot of naysayers have been ripping it a new you-know-what, but you really just have to use one yourself to appreciate it. It is definitely thinner and feels right when your typing, IMing, or MMSing on it. The speaker is ridiculously loud and clear, and the screen…wow. It’s just like the Sidekick Slide, except a whole lot bigger. The back of the device has a rubberized textured finish, and the full QWERTY keyboard is a pleasure to bang out emails. There are subtle improvements in the OS, but to be quite honest, that’s what makes the Sidekick a Sidekick and we didn’t expect too many changes. We’d have liked Wi-Fi to take advantage of T-Mobile’s Hotspot@Home service, or the inclusion of a 3G radio (even though T-Mobile looks to be shafted in this area by the US Government) but those are where the negatives end. If you’re a Sidekick user already, or are looking for something a little more fun, and dare we day “social”, you’ll be right at home with the Sidekick LX or Sidekick Slide. Head on over to our full gallery to check out the whole phone!

UPDATE: A couple early findings from our Sidekick LX…all ringtones, games, and applications do not transfer over from a Sidekick 3. This mean you’ll need to repurchase everything again. There is a chance this might change as the device is not publicly available, but we doubt it. Also, at this point in time, the Sidekick LX’s Catalog is heavily lacking content…whether developers won’t need to, or haven’t recompiled the apps and games yet, there is only a short few available things to purchase currently in the Application and Games folders.

Click on over to our Sidekick LX hands-on gallery!