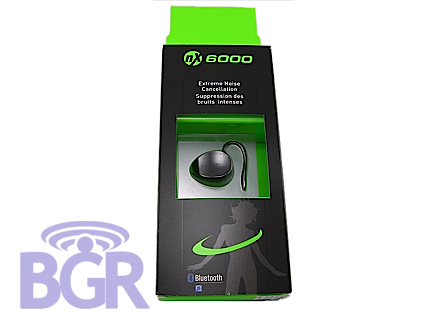 While we haven’t reviewed too many Bluetooth headsets to date, I’m really liking the Gennum nX6000 I’ve been trying out for the past week or so. An upfront disclaimer: I don’t normally use Bluetooth headsets on a daily basis, so please forgive me if I skip over something. The actual headset fits pretty nicely on the ear, or I should say in the ear. In fact, the ear hooks are completely detachable and are not required. Although it won’t be as secure without the hook, it’s a nice option for those baseball cap and sun glass wearing Bluetooth users out there. With only 3 physical buttons on the headset it doesn’t take a PhD to operate one. Plus, the big feature with the Gennum nX6000 besides it being pretty tiny, is the DSP noise cancellation technology.

Immediately the first thing that will come to mind for many, is how is it compared to the Jawbone, one of the most popular noise-cancelling headsets? I tried out the Jawbone for a bit so we have some basis of comparison between the two and here’s what I noticed…The Jawbone does have a superior noise cancellation feature but it is a big longer and bigger. I also found the actual voice quality and volume significantly better on the Gennum. Probably the loudest Bluetooth headset I’ve tried. The most closely related Bluetooth earpiece I can think of is the Motorola H9 which honestly can’t be compared to the nX6000. That’s a huge disservice, personally. The Gennum accepted charging by way of a miniUSB port that you plug in directly to the back of the headset. To know that it’s charging, the status indicator light first glows red when being charged, and then will be a solid blue color when charging has completed. The status lights for the headset are blinking blue when in use, a blinking red light when there is a low battery, and a blue and red flash when pairing. All in all, if I had to use a Bluetooth headset daily, the Genumm nX6000 would be very high on my list.

We’re liking the headset overall, so let’s give it  3 anda half BGs.

Click on over to our Gennum nX6000 review gallery!