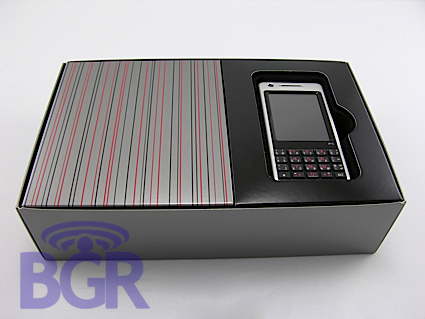 There is not a tremendous amount to say regarding the Sony Ericsson P1. You’ll either love, or hate, though we think you’ll hate it. Having never used this style of QWERTY keyboard (M600i, etc) , it could well have been the worst experience with a keyboard — ever! Its not even the design so much which in theory might prove to be functional, it’s just these keys! They are extremely small, so forget about accurate typing when you have to hit the right or left side of a tiny key. Really poor implementation. The phone itself to me seems like an average phone, I wouldn’t consider it a smartphone even though it runs UIQ. Usual specs include a GSM/EDGE/UMTS tri-band + 2100MHz radio , 3.2 megapixel camera with autofocus, and the standard Sony Ericsson afair like an RSS reader, 3D games, email, etc. I’d stay away from this now unless you can really master the WIZARDRY keyboard. We’re givin’ the Sony P1 one of five BGs, sorry. Gallery link below!

Click here to see the our Sony Ericsson P1 Unboxing