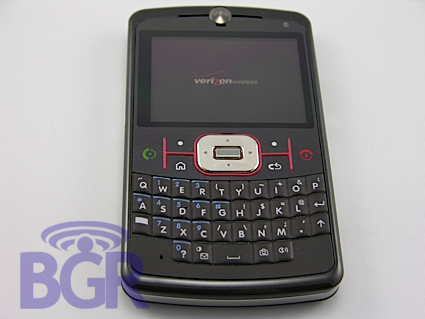 Yeah, you’re probably looking at the first live shots of the new Motorola Q9m for Verizon Wireless, and ain’t it a beauty? The Q9m uses a regular miniUSB port instead of Motorola’s new favorite microUSB, which makes charging and connecting a lot easier. The Q9m also looks like it supports miniSD cards for memory expansion, and has a nice red glow around the d-pad. This Q9M brings back the scroll wheel that the GSM Q9 lacked. Another Verizon customization was the home screen. It displays shortcuts for commonly used applications like the camera, messaging, web, music in a circular pattern on the screen. The icons in Windows Mobile are completely customized, and look for VCast music support on here as well. The QWERTY keyboard is fantastic just like the other Q9 we previewed, and the device actually has a metallic plastic on the front, and a black rubberized back. It feels good in your hands, and doesn’t seem like you would drop it easily. It’s a tad bit thicker than the GSM Q9 but that is understandable seeing as how miniSD cards are supported, but the camera appears to be only 1.3 megapixels. We’re gonna’ give the Motorola Q9m 3.5 BGs. Want more? Click on over to our exclusive gallery below!

Take a jump to our Motorola Q9M Hands On gallery!